So, how does a design jump from the drawing board and onto printed media? I thought we might walk through this process, especially for those of you who may wonder why the heck letterpress printing is so costly. Another reason is that this is an educational blog. My first priority is always to encourage folks just getting their feet wet in this industry and art. Particularly those here in Central Florida.

"Gary!" you may ask, "Why are you encouraging competition?? You are one of literally a handful of Letterpress operators and craftsmen/women in the whole State! Why do you want to encourage competition when you have this huge field all to yourself?"

Answer: Competition makes me better. It makes YOU better, too. It makes you work. But more than that, a community of craftsmen and craftswomen inspires. It promotes creativity. It creates awareness of your art. It also creates a better environment for your equipment because suddenly, parts, supplies, presses become more available. We learn from each other! So, in MY book, the more the merrier, and we all benefit. Letterpress was once dead. It's now alive because people like you and me are paying attention to it and are taking advantages of the tools we have at hand. This is how we grow, no?

To tell the naked truth, Letterpress in the main took a backseat back in the 1970s when offset printing and photo type editing, and later computer editing finally eclypsed the old Platen Jobber and Cylinder presses. Running these types of presses, traditional as they were, was just plain too labour intensive. When you had Union Tradesmen working at the God-awful 1972 rate of 5 - 8 dollars an hour, and Masters clocking 10 - 12 dollars per hour, and this new organisation OSHA breathing down your neck, you cut costs ASAP. Platen presses became the domain of die cutting, museum pieces and what few High Schools would risk them for Print Shop Classes. Even then, the cylinder type proof presses such as the Vandercooks, pretty well replaced the Platen Jobber Press in the Halls of Higher Learning. In short, until just a short time ago, Letterpress was essentially dead. In particular the Platen Jobber. (yes, I know, there are a whopping 20 or 30 printeries around the country that boast that they never stopped using them. Wow. 30 out of 30,000. We'll call them the eccentric few.)

Along came Digital Graphics Imaging, Vector algorithms and transparency printing, replacing the old high contrast Lithofilm. Along came Polymer Plates. The attention of traditional graphics plating firms took note, and, thankfully, interest in the new digital technologies. The computer replaces the old 14 x 22" R&R Robinson Camera and Darkroom for copy imaging, and suddenly a whole new world of possibilities are brought to bear on the Dear Olde Platen Presses, and indeed Old School Typography in General. And by the New Millenia, Gutenberg had shaken hands with the Digital Age. Who says you can't teach an old dog new tricks?

Ok, so what about hot metal type? Oh, to be sure, handset type is still a practiced art and craft! If anything, the Digital Plating phenomena has created more interest in the classical protocals and printing arts. There is a growing demand for handset products, in fact many consider "true Letterpress" to be Handset Only, which adds to what the Germans used to call the "Handwerk" of it all. ( Some of you living in Munich may recall the annual "Handwerks Fest".) There are still traditional type foundries in the U. S., such as M&H in San Fransisco, or Quaker City up in Honeybrook PA. But I digress . . .

Letterpress owes the rennaissance it is currently enjoying to the digital technologies. And dyed in the wool traditionalists like me just simply have to get their heads around this immutable fact. I am mentioning this because as of late, I have encountered a bit of pooh-poohing from the Museum Printing crowd of the new era typographers who have moved into the neighbourhood, implying they are something less than Letterpress Printers. I colour that notion absurd. Oh, yes, it's different. Oh, yes, one must learn new skills. I think that's the rub. New skills.

So, let's take a look at these new skills by taking a tour of the production of Tiffany's Wedding Announcement. We will look at the original concept, the "lofting" and editing of the digitised image and the final plate product in this installment.

Tiffany and Derek, friends of ours from Church, were thrilled over the prospect of having handcrafted wedding announcements. Tiffany had no idea that lurking in my workroom were two Platen Jobber presses, or that I was a sort of ersatz Christof Sauer (german revolutionary war era printer in Philadelphia. That's another story.)

Tiffany is quite talented in her own right, and soon I had a design which she came up with on her own drawing board, or, ahem, "Integrated Developmental Environment", IDE, the fifty cent word for a computer image made on whatever imaging programme you name, from Microsoft Paint to Word to Illustrator to Quark. In Tiffany's case, it was MS Word.

Tiffany used Edwardian Script to make her text body, and then used the Edwardian caps "D" and "T" with an Edwardian ampersand in the middle to be used as a background Monogramme. My job was to render these images into files which could be edited and sent to the plater. My IDE of choice is Macromedia's FreeHand MX. Two colours would be involved, the monogramme in a blue-green sort of teal, and the text in a fuchsia sort of magenta. The paper is an awesome Neenah Linen finished Pearl, which has an Opaline reflective effect, but not overly severe. The finished printed piece would measure 4.75" by 4.75", and would be adhered to the inslide of a four-folded cover which will enclose the announcement like petals of a flower. A very creative idea, Tiffany!

Importing an MS Document is not easy because Word is usually not very friendly to vector IDEs, so the best way to go for me was to redraw the whole thing. I resized the image on a 4.75" square canvas, and superimposed the two designs in as close to the finished colour as possible. The image below is a screenshot of the FreeHand IDE and the superimposed image. 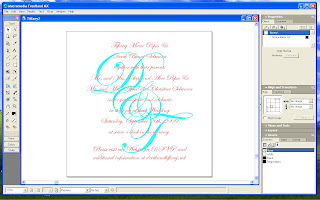 It took a little tweaking here and there to make it fit and not so reduce the text so as to make it hard to read. Also the contrast of colours must lend towards legibility. Fortunately tertiary shades of green/ blue and red/yellow are complimentary and contrast each other. Upon finding a comfortable point, each element of this design must be separated and converted into black and white images for the Plater. In this case, the Plater is Owosso Graphics. 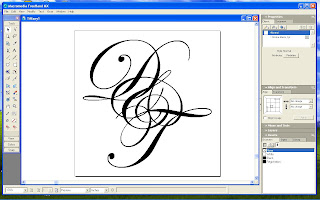 This is the first plate which will be printed. Tiffany did the final arrangement of the elements of this monogramme herself on my computer until she had the three elements arranged according to her liking and approval. At this point I saved the image. It was ready to send. 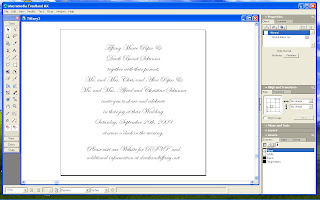 This is the second plate, converted to Black and White. But we ran into a snag: Tiffany's Wedding Website changed ownership, and the address had to be changed. And later still, when the new ownership proved a bit limiting to Tiffany (she really likes to design her own stuff, not having her choices limited!) we had to edit the text for a new web address. This was done by my saving and sending .pdf images to Tiffany for approval. But the deadline, July 26th, is coming on fast! So the approved second plate, along with the first plate was sent off to Owosso, taking advantage of their overnight return option. I might add that the metal we ordered is 16g. magnesium mounted on wood, type high. This was a cost cutting move on our part. We initially wanted copper to polish and give to the Bride and Groom as a souvenir, but in this economy such luxuries often need to wait. We can have copper cast later. As a designer AND printer, I can save my clients a bit of money here and there by offering alternative choices, which is the cool part of what I do.

Even though by this time I have several hours of design time into this project and Tiffany has an even greater investment in "sweat equity" owing to the twists and turns of plans, it's been great to work hand and glove with Tiffany through this project, and for her, having a personal part of the design is invaluable. 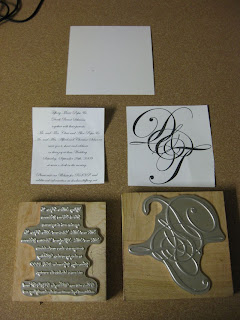 The plates arrived from Owosso the next day. Platers send proofs along with their plates so you can proofread without having to ink up and roll your plates through the proofing press. In this case I have cut down the proofs so I can physically check their sizes against the actual stock which will be used. You can see that piece of stock at the top of the photo.

The next shots are close-ups of the plates and proofs. 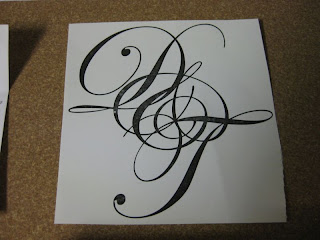 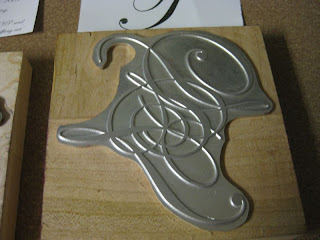 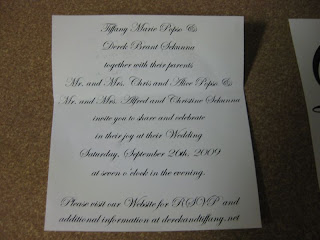 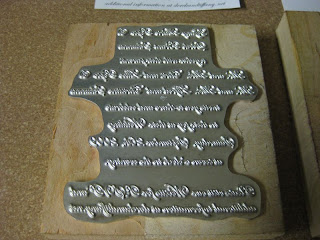 And now we are ready to take a colour impression test for the colour mix. Hopefully Tiffany can make it down to the shop for this phase of the operation. While she has given me an awful lot of room to make choices for her, I want the client to be as much in charge as is practicable. The process is not inexpensive, and involves a lot of handwork, design work, time and involvement to make happen. Digital technology notwithstanding, there is an awful lot of handwork that goes into Letterpress printing even BEFORE you make the First impression!

That's it for now. Stay tuned for the next installments where we visit the colour testing and proofing, makeready and lock-up, and the actual run of the two colours.

I remain your most humble and obedient servant

Posted by Gary Johanson, Printer at 6:05 AM