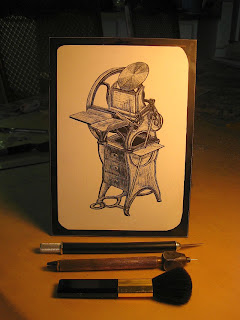 Here it is, finished up and "cleared out". The "clearing out" part meant scraping the white areas because ink dust from the stylii and the brush can actually tone the white areas in the same manner as graphite dust. What you see in the foreground are my makeshift tools: an Exacto knife (for clearing broader areas), a stick-pin in a brass optical reamer holder (use the needle for fine areas and for layout outlining - depending on the needle, the line produced can be so thin as to serve as a guide line which can be easily scribed over), and a Mabelene mascara brush to wipe away scribing dust, yet not so heavily so as to rub it into the white clay area. Yet another tool is a fine point Sharpie for corrections. I would have used my Rapidograph, but when cleaning it this morning I discovered the pin plunger in the venturi had broken somehow. It's now a casualty. 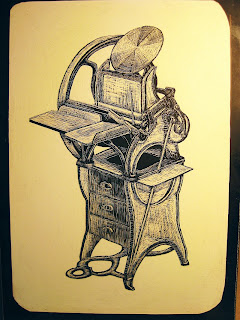 Here is a bit better view. Just to review, what I did today was finish out the flywheel, the ink disk and the drawers. This particular press is actually a Golding Pearl Old Series 5x8", using the three drawer storage table. My actual Pearl is larger, 7x11, and uses the two drawer table. The drawers are bigger. Those of you that follow my blog and know your Pearls might also note the roller hook journals were adapted from my 7x11. The 5x8 in the engraving that I photocopied had something different, and it wasn't clear just what I was seeing. 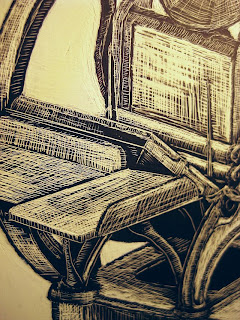 Yet a closer look at some detail. Here is where the "woodcut" nature of scratchboard or Clayboard really stands out. And to be truthful, my earliest background in graphics and pen and ink rendering as a kid of 7 or 8 years old was copying cuts from Duerer and engravings of Theodore De Bry. I loved how the hatching of lines could produce a building up of tonal values. Then later, I was introduced to a gentleman named Thomas Bewick, and a whole new world of white on black line scribing technique was introduced. All this to say, the natural wood-cut 'look' is most likely further enhanced by my personal technique, which is very wood-cut influenced.

Well, anyway, that's it. I may attempt to plate this, but I think I will hold off on that until the next experiment which I hope will be something that will eventually end up being printed on paper - via the iron Letterpress, of course!

Good Providence in all your Letterpress Endeavours!