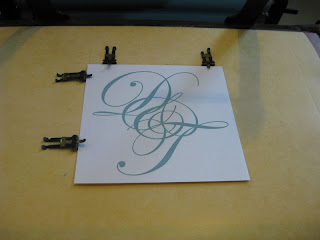 The next phase is the colour mixing, for which I wanted Tiffany to be present, at least for most of the process. Tiffany took most of the following photos, in fact.

It became pretty clear that the electric Teal and Fuschia, as it appears on the computer screen, wasn't going to happen. In fact Tiffany noted that even pulling a print from her file on her own printer gave hugely different colours. We agreed that the contrast between the red letters and almost blue-green of the monogramme required a much more muted monogramme and a darker magenta in the text. Now, one of the things we have to remember is that while most cards are around 5 x 7 in., we are reduced to putting the same amount of information . . . actually even more than most . . . in an area less than five inches square, which called for reduced sized letters. This, in turn, makes the thick strokes of each character thinner, and the thin strokes thinner still. We need to maintain sufficient contrast so the card will be something like legible without the need to take a couple Excedrin because of the optical contrast.

We mixed colour by as natural of light as possible. Mixing colours can be pretty tricky, certainly not a very linear affair. Each colour is chemically different in some way, not unlike Artist's oil paint. I mix with a palette knife. I started with Van Sonn oil based opaque white. Next came process blue. All you need is a couple molecules of process blue , and boom! You have a pale baby blue that looks pretty good. Then I added process yellow, about a molecule. Really! I'm exaggerating the proportions, the point is, it doesn't take much to darken down a colour, but to lighten it requires gobs of white. So go slow. A touch of yell0w, and we had a decent confederate blue on the verge of green. Tiffany wanted more blue, so I added 80% white and 20% blue together and added it to the mix. The result was a fairly light dusky teal. 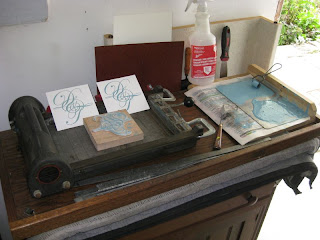 Say what you want about the small Showcard Presses, I love my little proofer! It's no Vandercook, but it pulls a nice print. Good enough for Tiffany to give her OK to the monogramme colour. So, one more impression test to go. Now we're shooting for a compromise Fuschia / Magenta. These cards are being adhered to a four-fold bi-coloured envelope which is, in fact, Fuschia and bright Teal. We need to stay at least acceptably teriary to these colours. Again, it's a compromise between Optics (I am an Optician, after all. This process smacks a bit of Ishihara Colour Blindess test patterns!), legibility, colour keying, and what is possible with real live printing on this particular stock. Changes are made as you go. This is quite a labour intensive process. In our case with this job, Tiffany and I spent two hours, and even then, at the point she had to leave for an appointment, I still needed to do some slight alterations. Thus, the custom colour selection process can take as long as the printing process itself! Keep this in mind if you are considering custom colour work. Pantone swatches and ink scales notwithstanding, it still boils down to eyeball, testing and proofing. 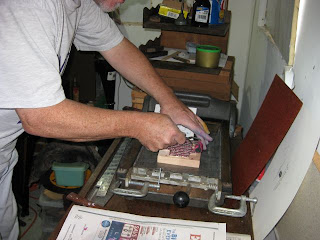 Here, I am using my small brayer to lay on a magenta mix. We ultimately wound up going darker than the colour I'm using here. By principle, I always proof on the same stock as the run itself. Since this is Neenah's Classic Crest Linen in Pearl finished cover stock, there is a slight gloss to the surface, which means these cards, run with oil base, will smear very easily and require at least 12 - 24 hours drying time. Twelve hours is sufficient to permit the second colour. But in proofing, we are sort of doing a wet on wet thing that gets sorta smeary with handling, so we are looking basically at the combination of the two colours. 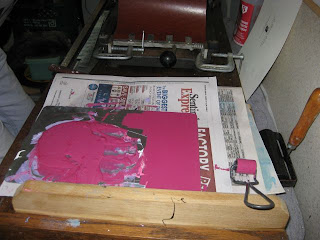 This is the first magenta mix. It was a bit light. 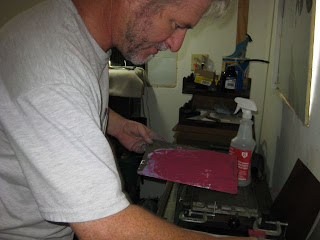 Eventually we went darker, and finally put the colour to bed. After the colours are mixed, I scraped the ink directly into small cans. Usually what I mix on the metal palette is more than enough for a platen press run of several hundred to a thousand. So, now we go to phase four: the actual printing! 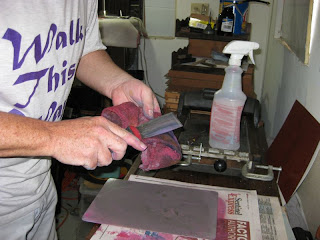 Phase 5(a): Laying down the first colour. 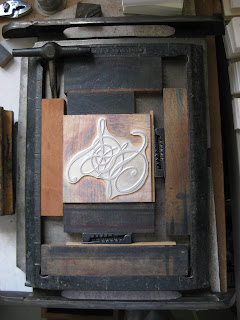 The monogramme is the first colour printed. The text will be opaque and lay atop the monogramme. Now the Monogramme itself is no simple matter. Makeready on larger wood mounted cuts can be a bit tricky because the cuts are almost never exactly even. In my case, invariably I do a slight build-out from the bed to make up for lighter impression on one side or other of the cut. A strip of masking tape across the back on the low impression side usually does the trick, as in the case with this cut. For dies, I prefer to do most of the leveling this way. Spot issues of impression I handle on the side of the platen/ tympan.

Now, this cut needs a bit of analysis. Like the body text, this monogramme is fashioned from Edwardian Caps, which means it has thick and thin strokes. The thick strokes carry a lot of ink, which must be spread evenly over the wider surface. Platen presses can be tricky here. The ones that do the best job have four to six rollers, two Forme rollers and two or more rollers dedicated to handling and spreading ink. However, I have read that a way to compensate for this if you are using less than four rollers is an old printer's technique of double cycling the press, which is simply letting the rollers ink the Forme (or Die) twice for each impression. In fact, one web site says that the added ink rollers were actually there to imitate the technique of double cycling in a single cycle to speed things up a bit. So I'll pass this little tid-bit on to you.

Another thing: we are not using a loose fibre paper such as Lettera. We have a polished stock which means you cannot just "ram" the die into the paper. You must find that pressure which ensures good ink coverage without squeezing it off the relief surface and making the ink gather at the edges. I call that "Sabateuring" the ink, from the photographic "Sabateur",or "Posturising" effect where you flash the print paper in developer, forcing the silver salts to rush to the edges of the latent image as it's developing, producing exaggerated edge-line contrast and evacuated centres of mass. It was great for advertising images in the 1960s, but is sucks on Letterpress. And I see a fair degree of this effect even on loose fibred stock as people just punch away at that Lettera. Need I bring this up again? There is a time and place to deboss, and a time to apply judicious amounts of pressure to execute a finely articulate line. Tacticity does not equate to a punch. 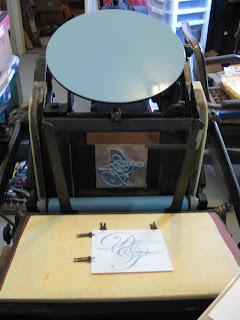 Here's the set up. I wound up having to use a fairly hard makeready, and there is a slight depression noticeable from the rear of the printed piece, nothing like a punch, but enough pressure to imprint through the linen finish. The impression is on the verge of "light" but to increase pressure would be unwise. I can tell by the sound of the press when pressure starts to mount, and I like my iron and steel castings too much. A critical evaluation of the image through a loupe shows a fair edge, very slight deboss, no Sabateuring of wide area coverage portions, I call it a good impression. I then ran 120 more. These had to set out and dry, which took up a lot of room. I placed a 3 x 4 foot square drawing board on the upper deliver table to set out 20 cards at a time, then removed them into the house to park on the dining room table, coffee table, piano, piano bench, and wherever else they could spend the night. 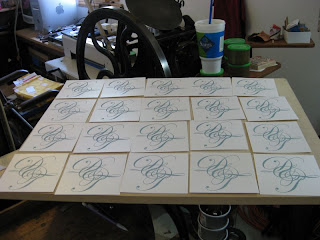 That was my day yesterday. On Tuesday, the "red" run happens. If the contrast between the Monogramme and Text still proves lacking, I will lighten up the already lightened dusky Teal and run the job over again. If that's what it takes, we do what we must.

The bottom line is that Tiffany will have a great card, one that she will always remember, one that she will have in a scrap book for the rest of her life. The very least I can do from my studio is my very best. And guys, one thing I learned from restoring antique wireless transmitters and receivers, and a few presses: it's a labour of love. You do charge for your sevices but you will never extract a price for all the labour you will be performing. It just cannot be done. You charge a fair price for your services based upon what the market will bear in your area, and based on what you need to make to keep the doors open and a roof over your head. But the bottom line remains: you gotta love it. You must enjoy it. Excellence always resides at the intersection of Talent and Passion. You must have a Passion for this stuff. And I will assume you have some talent in this art, otherwise why even consider it? Hmm?? :>)

Last installment to come after the last run. I know that to many of you, this is old hat, but I hope that for some it will prove to be a revealing and educational glimpse into a field that you may be considering as you grow your interest in Letterpress Typography.

-gary.
Posted by Gary Johanson, Printer at 6:21 AM