Moving the 12 x 18 New Series C&P from the Settlement. 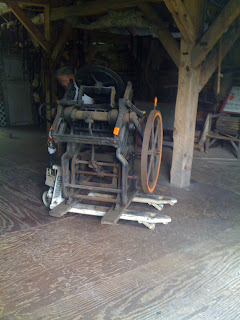 So, this was our challenge Saturday Morning. To move a 12x18 NS C&P out of it's barn, across the barn and up a ramp and into a truck with three ambitious types: Myself, of G. Johanson, Printer, Nick of Mama's Sauce Printery, and of course sweet Polly, the intern who took most of the photos you will see here from an I-phone. 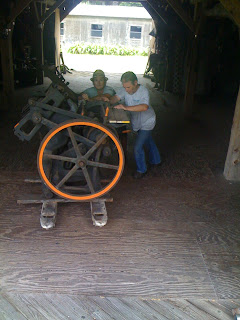 We used a large rental with a hydrauling lift gate. We thought the hydraulic lift would be larger than it turned out to be, but it worked anyway. But we had to take it from the opposite side of the barn from where we expected to load it. Fortunately, the Barn is a braced frame structure with floor summers. After a bit of a tenuous start, we managed to lift her with a pallet jack and begin to wheel her out. 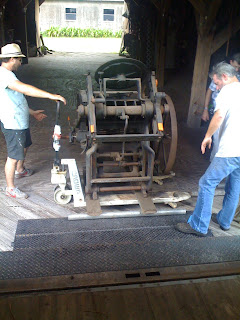 We rolled it to a point where it had to pivot. The leading edge of the tail gate was nearly a forty-five degree edge. This posed a slight dilemna since the pallet jack wheels are about the diametre of a Silver Dollar at best. She would not simply roll right on to the lift gate. 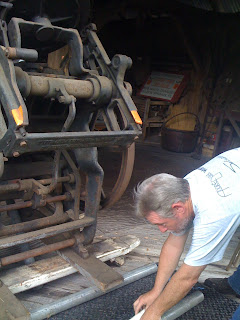 Here I am laying pipes down in an effort to turn the press slightly, and into position. 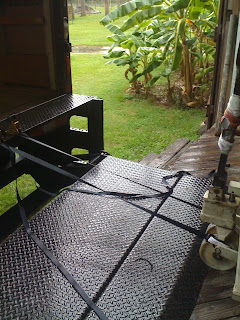 After the pipe idea was aborted, we decided to simply bring the press AND the pallet jack up on the tailgate together. We used four "come-alongs" to winch the press over that steep incline you see the front wheel of the jack about to navigate. It was a slow process. 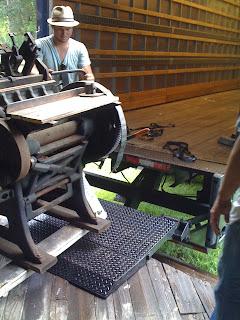 Finally we got the Press and Pallet Jack on board. Polly flipped the switch, and it's up, up and away. 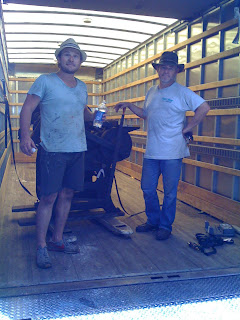 Here's Nick and me just standing there amazed that we managed to hustle 2800 lbs of iron and steel from way out there to way up here! Of course you noticed that the ink disk has been removed, as was the flywheel. 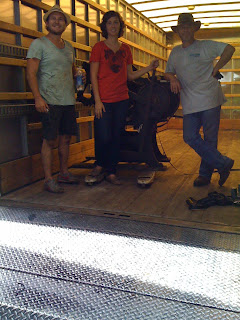 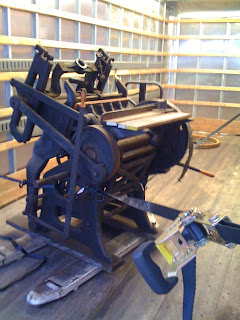 The press was secured by 4 one-thousand pound strapping from the come-alongs. It was hauled in this manner down to Mama's Sauce in Winter Park some forty miles away - where it will be restored and resurrected. 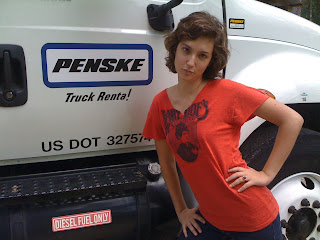 Ok, Polly, where do we go from here? Lunch in DeLand? 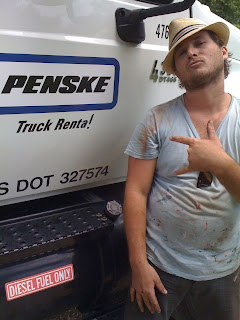 Thanks, Nick and Polly for the fun afternoon! And the Dos Equus, Quesadillas, kaffee con leche, and some neat memories. I should be down in Winter Park this coming Thursday with an orbital sander. Hopefully we can get this press rolling inside of a month. The only real sticking point is the impression throw-out lever, which is binding at the bearing. This shouldn't prove to be too difficult to un-stick. Overall, the press has a lot of surface rust, but the years of ink and apparently liberal oiling has, in fact, resisted the elements well. A few bucket loads of Diesel Fuel and Transmission Fluid and she'll be good as new!

So, what did y'all do last Saturday?