Sanding and Finishing the Delivery and Feed Tables 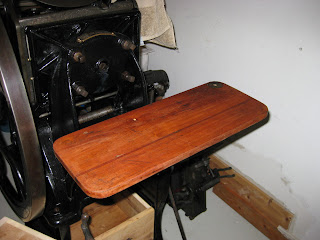 The wood filler was fully dry by this afternoon, so I took the orbital sander to the delivery board (which I believe is the lower table), the feed board (which would be the other, swivel or "swing-away" table.) Better double check me on that, I could have it backward. But I feed from right to left, so to me the right most table would be the board I feed from.

Anyway . . . Sand I did. I wound up taking it down to the bare wood after all because I needed to smooth out irregularities. The distress marks in the wood are still fully there. I uncovered things that were painted over, too. Remember those photos of the prior glue job where I showed the drips on the bottom of the table? Well, whatever sort of glue that was, it was used as a filler, too! I sanded down to where at least one hole is visible. No clue what sort of glue they used, it looks as white as caseine.

I was advised that the original laquers used were of an orange or amber variety. Upon cleaning the boards after sanding, I applied just that, an orange-amber, which really brought out the grain in the wood. The distress marks show well, too. The colour is really quite pleasing, gives a sort of aged look, not unlike an old school desk. 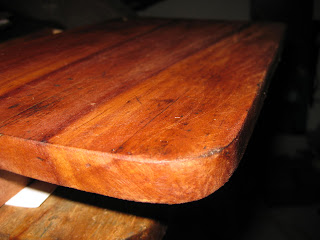 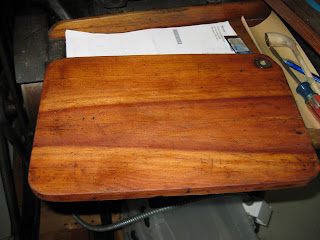 What you see is a stain with a finishing agent. It's Minwax's "Gel Stain". When this dries, a coat of varnish will be applied, wet sanded with steel wool, then another coating applied.

Also receiving attention is the metal hardware associated with these tables, the steel feed-through stand-off and collar, bolt, washers and bottom brace for the swivel, which I sanded and wire-brushed with a dremmel, then spray coated with Black Oil Based Rustoleum. After a few hours, the hardware was dry enough to handle and photograph, as viewed below 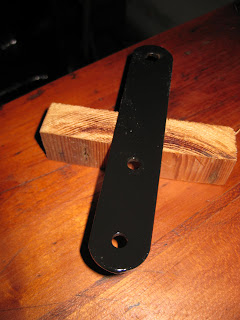 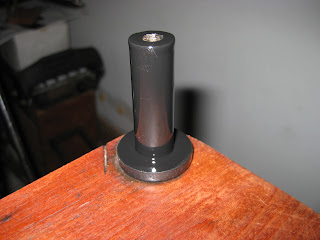 My next day off is Thursday, so the paint should be set enough to begin installing. Meanwhile, I'll be applying the varnish between now and that time, hopefully. I may add that the way the swivel works is by slippage between two washers. Those washers cannot be painted, the paint would cause too much friction, not to mention peel the paint away. Rather, they need to be lubricated. The way this swivel works is like this: A long, 4" bolt feeds through a collared hole in the top board, feeds through two washers, the long stand-off, through the bottom board, steel bracket, through another washer, and then terminates with a quarter-inch nut. The bolt itself is similar to a carriage bolt: rounded head with square shoulder just under the head.


I took a look at the drawers I made last week. Remember, these drawers are intended to be temporary, but since I had the sander out, I decided to sand the drawers, too. Upon inspection I noted that the pine was doing what I had suspected it would do: retract and warp right after you work it. Pine these days is really nothing like the pine of 100 or 200 years ago: the Foresters in the yellow pine forests of North Carolina will tell you that today's pine is a mere shadow of the robust stock that grew in the last century. The quality is by far inferior. I have heard this from carpenters of my grandfather's generation, too. And being part of one of the founding families of North West Indiana which still has a Homestead on the premesis, there is plenty of pine woodwork from the 19th century to tell the same story. It's been only five days and the wood is already pulling from the nails. So, I began to get a bit aggressive: wood glue, clamp, and if needs be, dowel the drawers. They will be replaced, sure, but I don't want them falling apart, either! I am also staining the drawer fronts to match the boards as well. 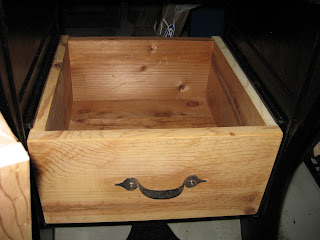 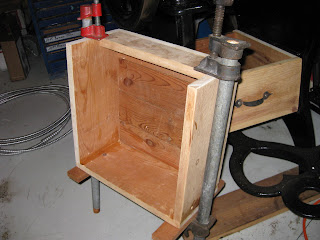 Is it my imagination, or are the drawer pulls making the drawers look like they're smiling? Hmm . . .

The drawer that seemed to have the worst problem with retraction is the one with the pipe clamps. Sanding actually helped the movement of the drawers, too. I rounded the angles and corners a bit, which makes them slide easier on their courses.

I have two more photos to share as a parting shot. These photos of the sanded and stained backboard which was nailed to the back of the feed board. It will be re-attached with hardwood doweling and glue before the varnish goes on. 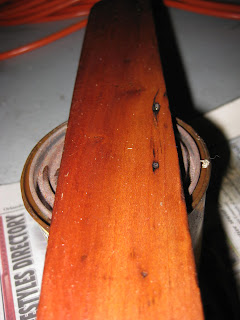 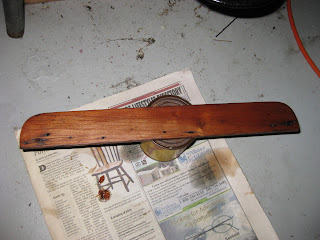 That's it for now. I figure between the boards and the drawers, I may have another two weeks of work (which, being interpreted, means two full days of work, a couple of my days off.) to finish the project. I'll keep posting the progress.