More "finishing" work on the Pearl 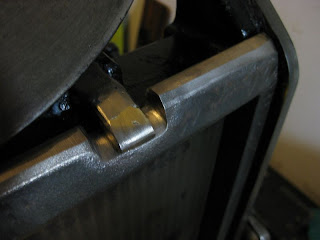 What you see in the above photo is the chase retaining clamp and the chase itself resting on the typebed of the Pearl. If you look closely you will note dissimilar colours in the metal at the end of the clamp, which I call a Chase Clip. You see, I sorta make up terminology as I move along . . . Especially at 1 am and I need to hit the road in the morning by 8 am.

What happened was that I was using this press with a Linoleum block, hand inking and making some impressions which actually, worked out pretty good. I don't have the rollers for this thing yet, and so this is about the only way I can use her now. As I was working the clamshell by rolling the flywheel by hand, something looked just a bit odd. The chase was resting at the exact level as the rails, and if I can judge distances and proportions, I'd say that clip was protruding beyond the rail line. So I found a straight edge in the interminable mess I call a "Studio" or "Shop", and laid it across the two rails. Sure enough, the clip protruded far enough out to take a healthy divit out of any roller carreening across that area on the way to and fro the ink disk.

I put a query out on the LETPRESS list, and some suggested the chase may have been the culprit. As it turned out, my chase did need some attention anyway, it had a lot of rust on it, and this provided a handy excuse to take it out to the grinder / wire brush and knock some of that stuff off. I ground down the depression, or mortise, atop the chase to make the clip set lower. I then took down the top edge and shoulders of the chase, leveling the top as I ground it down, using a straight edge. I succeeded in allowing the clip to rest lower, but it still protruded. So I removed the clip entirely (tapping out the cotter that holds it to the casting atop the type bed), carried it out to the shed where the grinder is, and stripped the paint off it to see what was going on. I noted a thick roundish area under the clip which signalled some welding had gone on at some point. Removing the paint revealed the bright original iron suddenly ending and a bright yellow metal suddenly beginning, seamlessly.

Ahh, yes, the ol' clip had broken it's tip off at some point in the misty past, and somebody formed a new one. But this begs the question: was this press ever in use thereafter? It would have been impossible to use rollers! At least, not for very long!

I took her down about half an inch, rounded a concave area in what once a convex mass of metal on the underside of the clip. She now rests as you see in the above photo. Both chase and clip are well below the surface of the rail, and there is a healthy clearance beneath a straight edge suspended over the two rails. My future rollers will be safe!

I will re-apply black gloss Rustoleum on the finished clip, and may paint the chase as well.

BTW, I'm in the market for another chase for this press: 7x11", made for a Pearl Old Style Model 3. If anyone out there has one in excess to their needs, drop me a line, ok?

You Florida Letterpress folks: Think in terms of a Letterpress Weekend at the Pioneer Settlement sometime after the first of the New Year. I don't know what we will do, maybe just clean up the place (hee), but it might be fun, I'll supply coffee and Danish, and the Settlement Directorship would be thrilled to have us. The Pioneer Settlement for the Creative Arts is situated very near the intersection of US17 and Fla Hwy 40, in Barberville, just above DeLeon Springs, Fl. Very direct access to Deland, Ocala, and Ormond / Daytona Beach. I have no itinerary, but even if we just showed up and went over the equipment and took a tour of the campus, it might be fun. I'd like to see some involvement and activity amongst the Florida Letterpress Community. We have a slowly growing list of folks who would really like to get into Letterpress, yet have very little access to available equipment. It doesn't help that Florida is sort of the "Black Hole of the South" for Letterpress equipment. Seems like all the good stuff is bought and sold everywhere else! We need to change that!

So here's a Rebel Yell for the Letterpress Folks of the Southland be ye transplanted or no ( brother Yanks can yell, too :>) and maybe we'll get an eyeball on one another eventually!!