Well, the title is a little misleading. It's not a new discovery, we've had this press out in the barn of the Settlement for about ten years, now. As far as hunting, that's not far from the truth. I had to work my way to the back of the barn for this entry. What made it a bit easier is that some of the stuff was cleared out for the Anual Jamboree. But I have come across presses such as this stored in similar environments over the years here in Central Florida and in the Tampa Bay area. So I thought I might use Casey's Sister here for our subject. Casey is the 12x18 in the Print Shop.

In Florida, we don't have basements. We have garages, carports and . . . barns. Years ago, before U-Haul and Penske had air conditioned storage, we had carriage houses, sheds and other outbuildings built off the ground about three feet to guard against floods or incessant humidity. The wood of choice was cypress. The roof of choice was galvanized tin. You never know what you'll find in one of these structures. At the Settlement we have a rather large, aged barn large enough to hold the Grand Ole Opry in. And tucked in the corner behind the stage sits our subject. 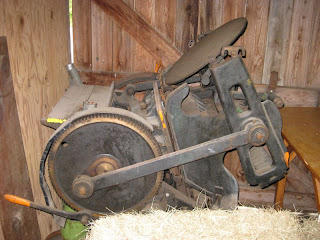 The Pioneer Settlement is having their annual Jamboree this weekend, so they have a stage set up in the barn, but they couldn't move the big gal. You need a pallet jack and some steel pipes to roll this press around. As it is, they built the stage smack in front of her. So I had to shoot these images thru bales of hay. You may notice that lever: it's not common on C&Ps. I believe it is a break for the flywheel shaft. It's a powered press, and it looks like the break is automotive. That is, not a simple friction block, but actual break shoes and cylinder! Either that, or it's a speed control clutch. Hmm . . . a four speed manual with overdrive! 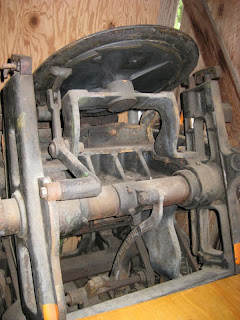 She's a 12x18 NS Chandler & Price. At one time she printed shopping inserts for the Daytona Beach edition of the Orlando Sentinel Star. She was meant to be power driven, unlike her brother Casey, which is treadle operated. I took some time out up at the Settlement to take some photos of her. She is wholly unspoiled . . . and un restored. Fortunately, she's all there! 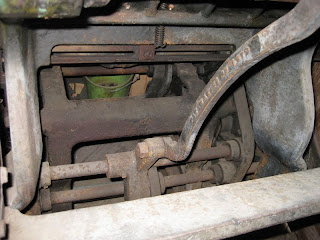 The barn is actually pretty good about weather. It's not insulated from the humidity from atmosphere, but it is insulated from mother earth. Thus, she has gathered dust and rust. But not all that much considering the time she has spent out there. I shot some photos as sort of a photo primer of how you may find a press in Old Florida Storage. While the canvas hood of a 1950 Pinin Farina may not survive this environment, Iron and Steel presses actually do fairly well. A lot has to do with the grease that inevitably covers them. Very few presses are cleaned off, degreased, then parked out in a barn. They are usually lifted straight from their former place of employment. 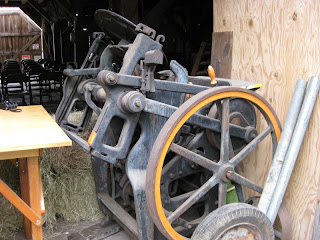 I opened the back barn door to get a flywheel side shot. The powdery stuff you see is dust settled upon the grease. There is a little surface rust in most places. The straight spokes give her away as a New Style. Because she's dead up against that wall, I cannot open the "clam shell". Also the key is missing from the flywheel so it freewheels. Not bad if you want to remove the flywheel and move it. Because the press is in impression position, as well as against the wall, I could not move the impression throw, but inspecting the linkage shows it's there. It may need to be freed up a bit, lubricated, wire brushed, but it's there. No problem. 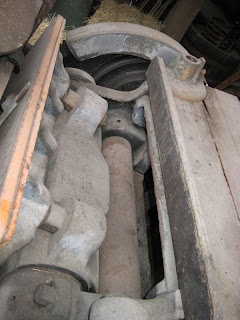 This is the platen just in front of the delivery table. The shaft upon which it rotates is typically surface rusted. Also no problem, in fact, what I usually do is clean what I can, keep a coat of oil on it and leave it go. The metal actually making contact with moving iron where the oil ports are is the point of major concern. Usually they are clean, protected by the oil that was there. So long as you clean out the oil ports, and lub her up again before you run her, she'll be fine. I use a combination of dremel drill, Q-tip or even paper clip to get gunk out of a clogged oil port, then shoot WD-40 in it to displace any water that may have gotten in there. Q-tip it out of the larger ports. Even the smaller ports you can use Q-tips, just pull off some of the cotton. 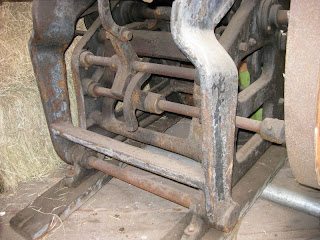 This is the bottom rear hinge shaft. Most of the rust on this press is here, actually. Like the Platen's shaft, it looks like it's got a layer of rust. Nothing a wire brush wheel on a good drill couldn't handle. The castings which hold the shaft have rust on them too. I scraped the rust to see how deep it was. Nothing that couldn't be cleaned with a wire brush, primed with Sherman Williams Iron primer and painted with Rustoleum for protection. 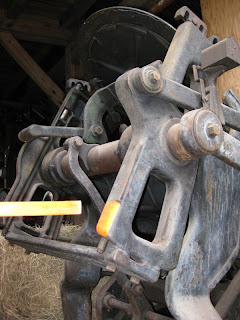 This is the shaft on which the rollers pivot. It gets a lot of pendulum action. A lot of it just needs to be degreased, some wire brush work. The oil ports looked clean, and again, regardless on the cosmetics, what counts is the integrity of the metal where friction happens. See those streaks? Dust and condensation from humidity. Many of the surfaces have a coating of grease which, while messy, had offered protection. In fact, a few places have the original green paint. Now, even inspite of a greasy grime layer, dust IS hygroscopic, and will convey moisture. A close examination reveals small rust pits even in some of the "clean" areas, but I wiped a lot of it off with a rag. So the oxidation process was impeded, at least. The saddles, springs and spring shafts look amazingly clean! 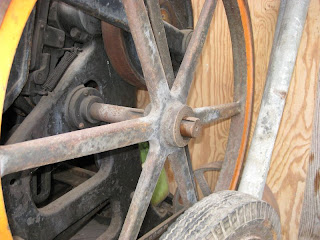 The Flywheel shaft has no key, as can be seen. The flywheel freely spins. This is actually a positive clue. I would have been nervous if the flywheel was frozen, because it would have meant rust in the glideways. If an exposed area such as this is clear, despite oxidation and surface rust, the more internal parts have a great chance of being at least as clear, if not even better. 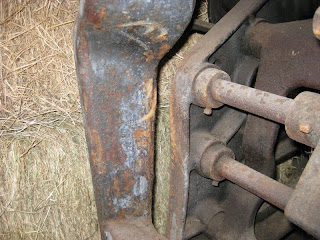 We are back at the rear hinge, here. This is a closeup of the rust. This is about the worst rust on the press. Nothing to write home about. It will take a little pressure with the brush wheel, but there is certainly no structural compromise. I took a blade and scraped some of it, as you can see the lighter coloured swipe. Automobile restorers would be pleased as punch if all the rust they found on their project restorations amounted to this! 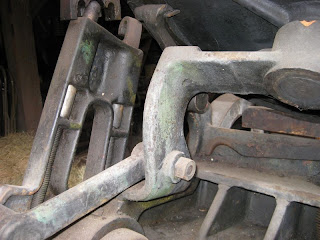 The green you see is actually the original press colour. The roller's spring shafts on that side can be seen, and fairly shiney at that! Crazy! The linkage here is for the "dog", or ratchet that turns the ink disk. Not very much rust, here. 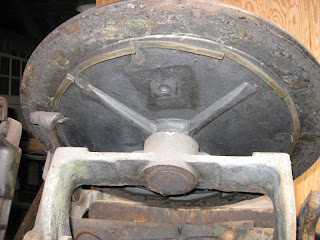 This is the bottom of the ink disk. The roughage around the bottom of the disk lip edge is from years of ink that crept around the disk and was not cleaned. This is pretty common, I've rarely seen disks that didn't have this build-up in an unrestored state. Nothing a wire brush and Rustoleum can't make short work of. 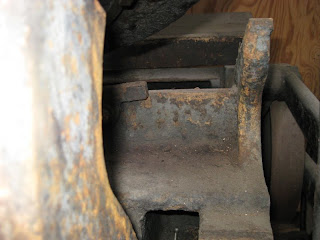 This is a shot from the rear of the type bed, left roller rail (left that is, if you are facing the press from the delivery board.) All you find here is dust, some grime, and very little rust. Clean this area with a Dremmel wire brush, the areas are fairly tight here. Whenever you wire brush, you abraid down to bare metal. You must protect this bare metal either with a coating of oil or grease, or with appropriate paint. A lot of press owners simply rub their presses down in oil or something like it. I have used a 50/50 mix of Diesel fuel and motor oil before with good success. It can darken the iron a bit. In fact, this mixture is used to break free frozen bearings and shafts by many Smiths. I've also seen Diesel / Transmission fluid mixes used, too. I think the Diesel gives increased penetrative properties to the oil.

Good Providence in all your Letterpress Endeavours!