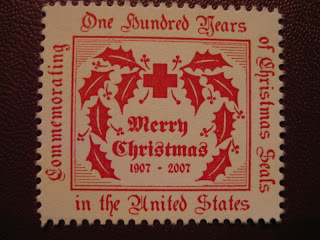 (Please Read the update at the close of this installment!)

This is the final product. I ran about half the printed souvenier sheets thru our ancient Chicago Peerless line perforator, so specimens were "issued" both imperforated and perforated.

Two colours were issued as well, the original Brick Red and also Process Blue. The blue copies were run on our 1890's treadle C&P 8x12, which is the press with the red flywheel in the main picture at the top. The blue ink was, however, a bit gummy and needed thinning, hence the spread of the ink, while acceptable, is not quite as nice as the brick red. But close and critical scrutiny aside, we all thought it was pretty nice. And my thanks go out to the folks that held the fort down in my absence.

I was stunned to find people as old as their mid twenties who had no idea what Christmas Seals were! What the American Tuberculosis Society is! Only a scant idea of the American Red Cross, and that through our bouts with hurricane activity. So I found myself explaining what the concept of the Seal was in order it's Centennial to have any meaning at all.

We have an ample supply ready for our Christmas Event the second weekend of December, when I hope we have our Post Office open. I'd like to have some specimens tied to an envelope with a cancellation. What would really be neat is to cart a bunch of envelopes down to the Post Office at Christmas, Florida, and cancel them there! 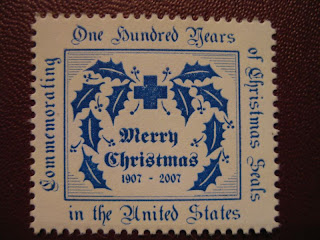 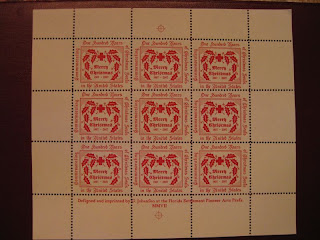 Above and below are the actual panes of nine. Perforation with the line perforator was quite a trick to register. There are really no jigs or gauges to go by, only your eye. After a few punches and ruined sheets, I got the hang of fairly centering the individual stamps, but boy! I've developed a real appreciation for my mid 19th century perforated stamps! Just at my limited level, centering just nine stamps took quite a bit of effort, and even then, what I mean by centering would be basically making sure there was adequate margin and none of the text was cut off. Perfect centering was almost impossible. But you can see by the photos they are just barely off center. Shades of 1850! I could punch about 5 sheets at a time. 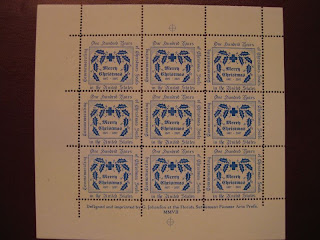 A large portion of any proceeds go to the Red Cross. The rest goes into print supplies for the next project. If anyone reading this might like a sheet or two, I can mail specimen sheets for a buck each, minimum two sheets. That way we can cover mailing and envelope. And, I'll put an extra seal on the front so a cancellation can tie it to the envelope, and you'll have an automatic Philatelic Item! We will cover postage and hard backing so the envelope won't bend. Specify what colour, and hint hint: the blue seals are far fewer in number. Also specify whether you want perforated or imperforated. These Seals are limited in number. Just E-mail me with your request and your address: wd4nka@bellsouth.net

Remember: these are not gummed! You'll have to do what the folks had to do in 1847: paste 'em.

(Update: as of 3/7/2015, I actually still have a few of these sheets left.  While the donation window has closed now, five years after this article was written, I'm sure the local Red Cross Chapter wouldn't refuse a donation.  I must, however, up the cost owing to mailing and other increases around the shop.  May I suggest five dollars?  Partially to get a mailer and cut chip board backing to send these safely to you, and partially so that the ARC might still receive a donation.  Contact me at: paperwrenpress@gmail.com.

Depending upon response, I may offer a re-issue of these seals from the original die.)

Posted by Gary Johanson, Printer at 12:36 AM