Prepping up the C&P's Motor


The motor that came with the NS 8x12 C&P is at least three decades old, and probably ran this press for the entire duration. It's a three phase 1.5 or so HP motor sporting a 1.375 pulley, which drives the flywheel via a 5/8" wide rubber "tractor" belt. Yeah, I took a double take, too, when I first saw this. The owner of the printshop, himself a Letterpressman from a while back, told me under no uncertain terms underestimate the strength of this belt. And he was quite correct: there is virtually no sign of wear yet! Since the press was stored in a corner for a time, sufficient dust gathered to warrant a thorough cleaning. There is some rust on part of the motor housing, and the actual wiring left much to be desired. The switch wiring was haphazzard, and the starter caps and corresponding wiring was left wholly exposed to whatever might come by and bump it. Not that any conductor was exposed, no, it was all wire-nut spliced and taped. But it just looked ratty. So I opted to give it a face lift. I am half way through. Here's some shots of what I've done so far. 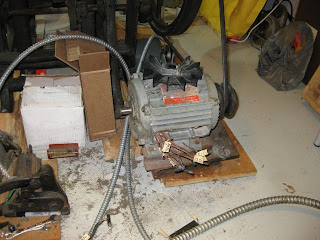 The capacitor housing and rear vent cap has been removed, the impeller fan is resting on top of the motor. Note the metal cabling. I am replacing most of it with new metal cabling. 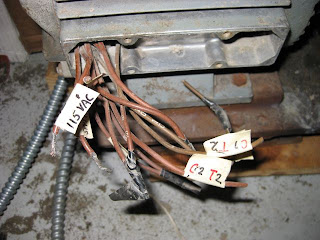 There are ten wires that come out from the motor housing which include ac input, switch, ground, two for cap one and two for cap two, one for ground and two which are spliced together. I recorded the connections on paper before I removed the caps and tabbed each wire with tape, just to make it easier than straining to see the numbers printed on the wire insulation. 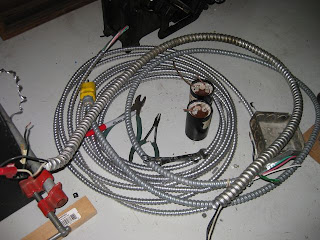 Here is some of the new channeling, with the old caps [no reason to replace them, they show no sign of problems. Nothing that a diode reforming jig and VOM couldn't serve to reform these if indeed it were needed.] 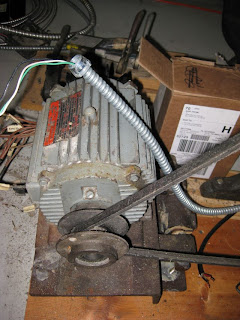 Here is a close-up of the pulley and belt. The motor is very heavy duty and sets on a pivoting iron hinge. The weight of the motor actually presents all the pressure the belt needs! I was asked if this may damage the nose berrings, and I gave it some thought. I don't believe it will because if you consider: it originally had a bolt and wing-nut tension adjustment, and any tightening at all would actually put even more pressure on the pulley. The motor hanging literally free probably presents the least pressure it has seen in thirty years! 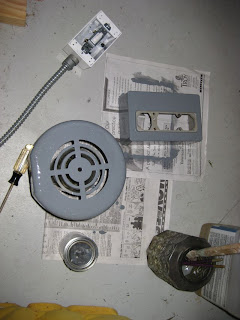 Ahh, yes, good ol' Rustoleum. As if I haven't already used about three cans of it on the Pearl itself. I think I'll take out stock in it. One second thought . . . .

Here you can see the newly painted (first coat) rear vent housing, the square capacitor and wiring junction box, which will receive an aluminium covering - an my brand new off-on switch! I have to get a face plate for it. The switch will be mounted beneath the delivery table. 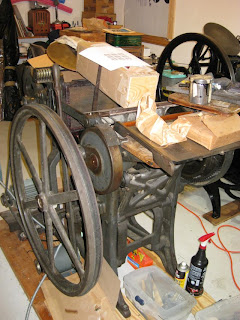 Oh, man, my shop is literally jammed with stuff! I am still in the process of getting rid of storage "stuff". A lot of inventory is stacked around. And yes, that's a shipping crate from none other than Fritz at NA Graphics. It's the rubber rollers and delrin trucks. All sorts of old, unopened Kelsey type, some of which you see on the delivery board. Beneath the press are cleaning materials. You might notice my trusty "tombstone" radio way in the back there. You can take gary out of the 'radio shack', but you'll never get the "radio" out of gary. 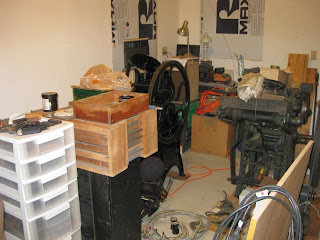 Here's another view of the shop from the other side. The white drawers in the left foreground holds wood furniture. The box atop the short profile cabinet holds a few fonts of borders and figures. Would you believe I still have to get a paper cutter in there, a type cabinet and an imposing stone?? Cabinets have to be put up, and floor mount racks will be installed as well. Also a cleaning station and a "fire box", a red fireproof can for wash-soaked rags.

As I proceed along with the motor, I'll post another entry with photos. Hopefully some of the things I am doing may help some others that stumble onto my blogsite.

Good Providence in all your Letterpress endeavours!