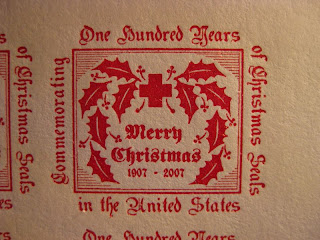 (Please read important update at the bottom of this installment.)

I changed inks from Rhodemine Red to Brick Red acrylic. I like this colour better, personally. Running this job served a number of purposes: not only to help me iron kinks out of the press itself, but out of me as well. For one thing, I had forgotten a number of things. It has been some years before I did anything like production work, and even then it was on a treadle press. For instance, I forgot that while Letterpresses are the most frugal of presses when it comes to ink economy, any time you have a plate or forme that requires broad areas of coverage, suddenly the press will dramatically increase it's ink consumption. I remember this from when I ran linocuts on the 9x13 Kelsey, but had forgotten. I couldn't figure out why after about 250 impressions the ink started getting light. I added a tad bit of packing just to make sure it wasn't a contact issue. The rollers made more than good contact with the forme. Then I added a dab or two of ink, and she darkened up for about another 250 impressions.

The overall image (9 seals in 3x3 format) is approximately 4 x 6 inches, and the holly leaves are solid, as is the red cross. Not a huge amount of coverage, but still much more than if I was running text entirely. Thus, I updated the ol' grey matter (memory) a bit.

Another thing that jogged my memory was the need for consistency of feed timing and focus. When treadling, you can sort of "cheat" by slowing down as needs be. I could fudge a poor insertion, take a split second to quickly flip the impression around to check for any punch thru the back of the stock, etc. Not so with powered drive!! It goes with or without you! The best you can do is throw the impression lever, flip off the switch ( I heartily recommend a foot switch! ) and if you have no break, slip-break the flywheel by hand. Do your checking every so many impressions, not while you are feeding. Focus on your feed and pull cadence. Don't sweat the mis-feeds. Concentrate. You are already doing several things at once as it is: proper feeding which must puzzle-fit time wise with your pull, and then you are stacking, and that's no simple thing either! If you don't have a method, that pull stack can get all over the place. So, you have to have your feed method ready, your timing in place, and your pull stacking place ready to go. My pull stack has a fence, and a wedge that permits the stock to naturally glide against the fence. Gravity does work for me.

After an hour, my back began to let me know I am over fifty. Dang! I forgot again! Easy fix: spread legs apart slightly, bend the knees a tad, keep back straight. Stood another hour behind the feedboard, no problems, although I may get an ergonomic mat soon.

So, even though I consider myself somewhat experienced with a Letterpress of this ilk, I am still on the learning curve. I believe to one degree or another, we all are, really.

Hey! Let's talk a little about the thing I'm printing! The common Christmas Seal has quite an interesting history, really. I'll do this by memory if I can. For any "fills" or more information, check out the Scotts Specialized Stamp Catalogue.

In 1904, Miss Emily Bissell was introduced to a new way to drive funding for charitable endeavours: the Danish Post Office sold Christmas Labels, dedicating the proceeds thereof to whatever fund they were participating in. Around the same time, postal authorities began attaching surcharge labels to standard postage stamps in Belgium, separating the label from the stamp by perforations. Emily brought this idea home with her. Why not use this method for sales to fund the National Red Cross? It wouldn't be the first time postal labels were used in this country, actually. In a more indirect way, they were used for funding "Sanitary Fairs" during the War Between the States. Sanitary Fairs were events held to fund the purchase of bandages and other medical items for the embattled troops. It was the ladies back home that made and wrapped bandages, cartridges, etc. for the boys in battle. The National Red Cross was one of the organisations involved in the Health and Welfare efforts in this war, and every war thereafter.

Emily's Christmas Labels were different. These funded the Red Cross directly. Taking the Que from Denmark's 1904 Christmas Labels, she designed a Label that was quite simple: a spray of holly surrounding the Red Cross Emblem. The text "Merry Christmas", with the later addition of "Happy New Year" due to late issuance, was included in the design, which set the pattern for Christmas Seals for years to come. I do not believe these seals were mailed, I think you actually had to purchase them to obtain them from a specific location, either the Post Office or the local Red Cross office, I forget which. Some of the specifics have left me, but I do know they were not give-aways.

The sales realised were upwards of $3,000, and increased every year thereafter. The next year, 1908, used a design, similar to Emily Bissell's, but designed by Howard Pyle, using two colours (red and green) with text surrounding the design similarly to my own commemorative. Just to show how popular these seals became, the sales (yes, again, these were sold, not given out)for the second year issue topped $130,000! The following year $250,000! The original 1907 Seal was the only single colour Seal ever issued: red. In fact, it was very close to Brick, the colour I use on the Settlement's Pioneer Press issue.

I designed the 2007 Centennial Commemorative borrowing from the basic original Bissell design. A spray of holley, a Red Cross, and the simple "Merry Christmas". The surrounding text suggests the Seal of 1908. I did not wish to actually make a reproduction because of possible copyright infringement, but I did want the design to recall the "spirit" of the original. While there are only just so many ways to render holly, holly berries and a cruciform cross, I did add hatch shading in the corners, used Fette Fraktur for the central text, and Magdeburg for the surrounding text. I added "1907 - 2007" to commemorate the original issue. My particular issue is imperforate, without gum. If you really DO want to use these as seals, you have to do what the first users of Postal Labels and Postage Stamps had to do: use scissors and paste! A dab of Library paste of evern a thin spread of Elmer's Glue will work. Basically, that's what they did for stamps prior to 1850. Emily's Seals, of course, were perforate and gummed.

My hope is to add a little bit of appreciation not only to the Christmas Seal, but also to Emily Bissell who fostererd it. Since 1907, countless organisations have used Seals of one sort or other to fund their causes. In 1915, the Red Cross cruciform was changed to the double staffed cross of the American Tuberculosis Society, a spin off of the ARC, and has used the Christmas Seal ever since as it's major funding source.

While the original Bissell Seals were Lithographed by Theo. Leonhardt & Sons, Philadelphia Pennsylvania, several issues between 1909 and 1930 were Typographed in a manner similar to my production method: Letterpress from an Electrotype or Stereotype plate, or forme. My "forme" is actually a quarter inch thick copper plate created from my own vector design, drawn in FreeHand, and plated by Owosso Graphics. They produce excellent letterpress plates, and copper has a lot of endurance.

Would you like a Centennial Souvenier Sheet from the Florida Pioneer Settlement for the Creative Arts? Just attend the Jamboree on the first weekend of November. Or . . . contact me. During the Jamboree they are free, although we will take donations for Bissell's original cause: the American Red Cross. Any that I mail out will cost one dollar plus cost of postage, for the same reason: donation to the American Red Cross. We here in Florida have a close bond with the ARC because of our propensity towards Hurricanes. So in keeping with the original intent of these Seals, the ARC gets any proceeds from any sales of these sheets. Drop me a request by e-Mail at: wd4nka@bellsouth.net

Also, come and visit the Settlement! If you are local and would like to volunteer at the print shop, contact me as well. We need some other letterpress folks to become involved! 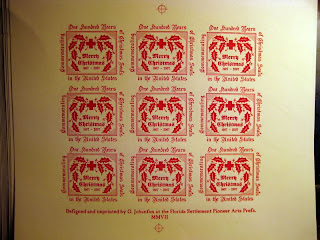 Good Providence in ALL your endeavours!

(Update: as of 3/7/2015, I actually still have a few of these sheets left.  While the donation window has closed now, five years after this article was written, I'm sure the local Red Cross Chapter wouldn't refuse a donation.  I must, however, up the cost owing to mailing and other increases around the shop.  May I suggest five dollars?  Partially to get a mailer and cut chip board backing to send these safely to you, and partially so that the ARC might still receive a donation.  Contact me at: paperwrenpress@gmail.com.

Depending upon response, I may offer a re-issue of these seals from the original die.)

Posted by Gary Johanson, Printer at 12:33 AM