It's been nearly a year since I purchased the C&P, actually. After that, the Rollers from NA Graphics. But then, my attention became diverted by the procurement of the Pearl and it's restoration, other presses like the Showcard and the Kelsey, procuring type, locating my old border fonts and trusty 24 pt. Cooper Black, learning how to convert bitmap into vector graphics, becoming acquainted with the digital aspects of today's letterpress yet staying firmly rooted in my handset background, learning about typecasting and slowly getting involved with Ludlow . . . the poor C&P sorta began to collect dust again. It became a table, a work stand, a thing to stuff things under.

But slowly I began to chip away at certain aspects of the C&P like refurbing the motor and all associated wiring. And this brings me to today.

Of all my presses, the C&P, properly, the Chandler and Price New Style Job Press - to use it's full Pedigreed name - is closest to actually being able to do what it was designed to do. Print. I decided to finally do that very thing. Slather ink on her and let her do her thing.

I have a wedding job coming up and it would be nice to know if I can do the job! I had few doubts, the Press works, it's all there, nothing is really wrong, but still that nagging "what if" sort of lingered in the background. So I found a can of Impreset Rhodemine Red and grabbed my copperplate forme for the Centennial Christmas Seal from last year, locked her up, grabbed about a ream of Xerox paper, installed the three rollers and after a bit of hurried make ready, made an impression on the tympan, which is really some smooth finished poster-board, more like hardboard with the consistency of a Manila Folder. It was the closest thing I could find at Office Depot.

The ink was a trip. The can had to be about a decade old. I bought it in St. Pete back in the 1990's. I expected to toss it, but it was actually pretty soft, at least enough to scoop with the ink knife. But putting it on the ink disk immediately revealed that it was too thick to spread out easily, I would have to scrape harder areas of ink that was too dense to spread with the ink knife, adding some kerosene just to render the goopy spots, now all scraped together on one side of the ink disk in a single pile, pliable. The kerosene did just that, the not-so-soft globs of ink became soft, and the press's own rollers smoothed out all of the ink. I was becoming concerned. Did I make a mistake exposing my brand new rubber rollers to a mixture of kerosene, ink that was way too thick, and the resultant "globs"?

As it turned out, the rollers did just fine, and transferred the somewhat thinned ink onto the forme without plugging detail, and the form transferred the ink to the paper well enough to notice that one side of the platen was just a bit lower than the other, assuming the form was straight. It took one piece of Xerox paper to build up the one side that was low, and the impression became level pretty much all the way around. But the ink was thin, and to make matters even more inconvenient, the kerosine was all the while evaporating away, quickly drying the ink to the point that the rollers became too tacky to print.

To make things even more interesting on this trial run, I discovered that what I had thought was a decent speed for the press, around 2000 Impressions Per Hour (the 8x12 is rated to 2600 IPS!) was wayyyyy to fast. The 8x12s and 10x15s are the two fastest presses of C&Ps Golding Jobbers, the 12x16 and 14.5x22 were considerably slower. Since my background is treadle presses and the large hand-fed powered presses, the speed at which that platen "flipped" was a bit unnerving. So, I tried to power the motor down using a Variac. Unfortunately, AC motors tend to derive their speeds by the frequency of the AC current, not the RMS voltage thereof, so all I could do with the Variac Autotransformer was to starve off the power to the motor, which did little or nothing to the speed.

Next I tried to add a pulley to artificially increase the circumference of the Flywheel, but it wasn't enough of a difference. Finally, I decided to attempt a very small sheave, or pulley diametre, but my motor's shaft is 7/8". All my small sheaves are for half or 3/4" shafts! Bummer!

The thought hit me: why not the shaft by itself?

Of course, all this time the kerosene is busily drying out the ink. I fed a few sheets and finally the rollers grabbed a sheet right out of the gauge pins, thru the gripper bars, sucked it right into the rollers. What a mess. But the rollers were no worse the wear for the ordeal, I found out the platen level was actually pretty good, the press got a good oiling and workout, the motor and press speed was at least temporarily solved, and I got a couple ok impressions of that Commemorative Christmas Seal that I wasn't able to print last year because the plate came AFTER New Year! (An administrative lag, not the Plate maker's.) 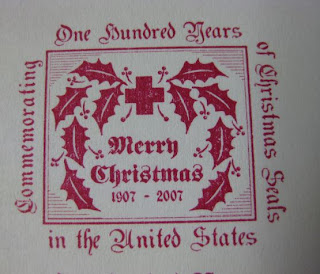 The Seal was inspired by the original Emily Bissel designed issues of 1907 and 1908. At that time funds were raised for the American Red Cross. The double staffed cross of the American Tuberculosis Society did not appear on U.S. Christmas Seals until 1915. The center design is actually closer to - but not a copy of - the 1907 issue, of which there are two basic groups: one with the simple greeting "Merry Christmas", and one which includes "Happy New Year". Both were printed in red, perforated and gummed. The original seals were Lithographed, although up until the late 1920's, several issues were typographed by Eureka Publishing. I believe the 1907 issues to be the only single colour issues ever issued by the American Red Cross or the American Tuberculosis Society. 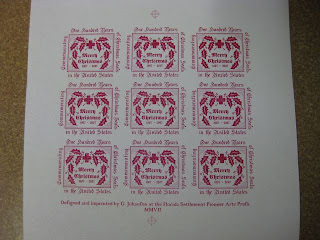 My design was executed in vector form using Macromedia FreeHand, the copper electrotype was made by Owosso Graphics. As can be seen, the Seals are printed as a booklet pane of nine specimens, imperforate and ungummed, intended as a souvenir sheet. The text on the bottom reads in OS Caslon: "Designed and imprinted by G. Johanson at the Florida Settlement Pioneer Arts Press MMVII." This font includes the tall "s".

Good Providence in all your endeavors!