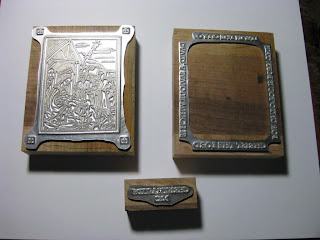 As a tradition, G. Johanson, Letterpress,  has always looked to the "Old World" during Christmastime for ideas in graphic design.  My art background is rooted in Germany, where I took my first steps in the Arts, both in Calligraphy, Printmaking, and Music.  Surrounded by over a millenia of culture,  600 years of printmaking, lettering, bookmaking, I lived and breathed the examples of this amazing art set before me.  In particular  I fell in love with the Woodcut.

This year, I sought to carry this Old World Spirit of the Season in our Christmas Cards for 2012.  For this year's offering, we honour the Nativity and the Legend of the Three Kings with an illustration from the book "Legend of the Holy Three Kings".  Just how "Holy" the Magi, who were in fact Zoarastrians, actually were,   might be in doubt, but there is no doubt that these priests were, in their land, called the "King Makers".  What they presented to Jesus  when they finally found Him - following the prophesies of the Torah and their own understanding of the Star map - were the very same gifts they would present during the inauguration of their own rulers.  They were, in fact, pronouncing Jesus as King.  This is why the visit of the Magi was so remarkable.  And this remarkable-ness was not lost upon King Herod, desperately seeking to secure his own Throne.  This was why the Magi stopped by Herod's palace: they qualified as a Diplomatic legation.  Their's was not a simple interest visit. 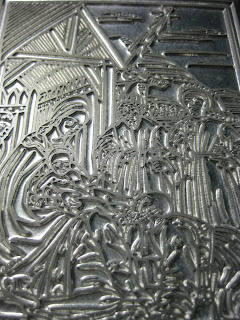 This cut shows the Magi presenting the King with the specified gifts of gold, frankincense, and myrrh. The official capacity in which these priests presented themselves was not only indicated by their gifts, but in the way they presented themselves.  They were beholding, in their estimation, a genuine King.

Above is a close-up of the metal die, adapted from the original cut, cast in magnesium by Owosso graphics to my specifications. 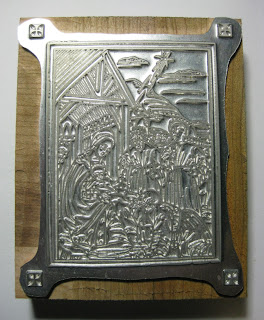 I love the way a metal die looks before ink is applied.  What you are viewing here is the black, or "key" die, which serves as the primary registration device.  The die is wood mounted. Three dies were used in the production of this card, plus the handset "Colophon" on the reverse.  The inside area is left blank. 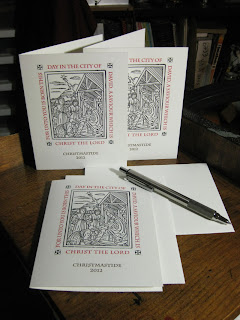 Here is the finished result.  These are A2 sized (4.25 x 5.5 in.) printed on a very elegant off-white stock that has the look and feel of handmade paper.  The envelopes are matching. 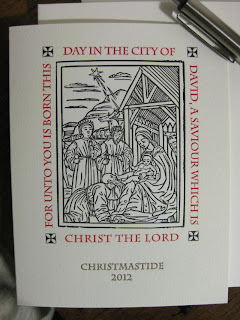 The image is obviously from antiquity: the Adoration of the Magi, from "The Legend of the Holy Three Kings", a woodcut illustration from the book printed in Modena, Italy, dating 1490.  Two years before Columbus set sail!   The verse surrounding the image comes from the King James Authorised version, the angelic announcement to the shepherds.  Maltese crosses adorn the corners. 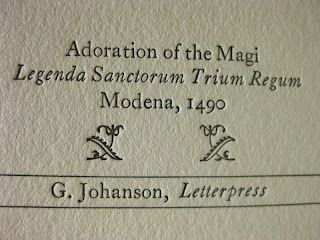 The text on the back of the card is Caslon OS 337, the very same font that serves Colonial Williamsburg, cast from the same foundry. 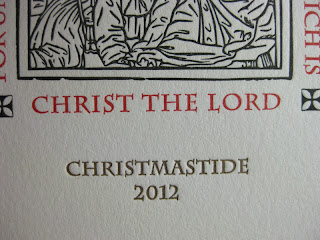 The Legend is printed in Gold oil base.  All my inks are flax-seed based ink.  This particular gold is Van Son specialty ink, which cost a small fortune.  Very nearly $80.00 per pound.  But oh, is it nice. 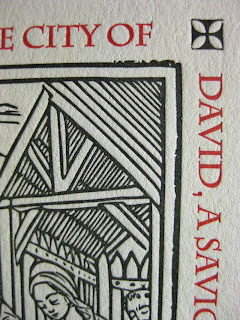 The original image had what appears to be burrs on the outer border line.  The lines are not exactly parallel.  It was cut purely by eye, 512 years ago, possibly with a straight edge knife.  I had the option of cleaning up and straightening the lines, but I resisted this temptation.  This is a hand wrought work of art in it's originality, and I wanted to preserve that feel as much as possible.  These are never to be seen as flaws. 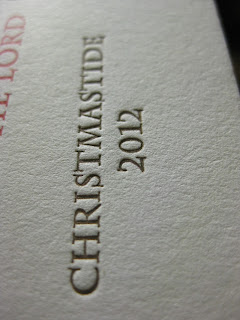 "Christmastide" is an old term, referring to the period between Nativity to Epiphany, alternately, Heilig Drei Könige, or Three Kings Day.  It's the same as "Yuletide".  Unlike the typical American celebration of the Day, my background culture calls for the celebration of the Season. 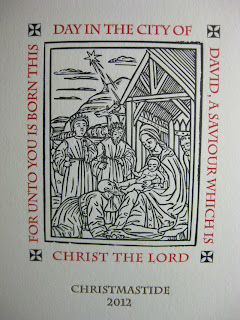 G. Johanson Letterpress plans to add to this edition each Christmastide, featuring a traditional woodcut typical of the Incunabula period of printing and bookmaking.  These will be limited edition, each edition limited to 200 prints.  There may be two editions per year depending upon demand.  At this point, I have printed only one edition of these cards. 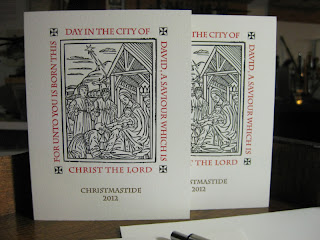 If you are interested in purchasing these cards while available, (and take advantage of direct on-line payment!)  visit my new Etsy Shop by clicking here.

That's it for now.  Stay tuned for our next installment!  And the very best of the Thanksgiving Season to you all, from Gary and Staff at G. Johanson, Letterpress!