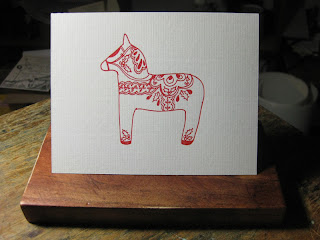 My daughter, designer/artist Anna Coleman, decided to go simple, almost minimalist with her Christmas Cards for this Holidy Season.  Her subject: the Dala Horse.

My father's half of the family came to this country around 1900.  They came from the Nora District, not far from where these wooden horses are made.  Our home has always had at least two to three of these horses.

A Dala Horse has a history dating back at least to 1800, some historians crediting soldiers, who at the time were quartered in private homes in this district, for the first of these horses.  They were carved in their spare time and given as gifts to their residential hosts.  More than likely, they were given to the kids, but in time, they became replicated by the local woodsmiths, where they became part of the folk art of the region. 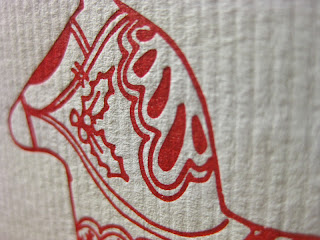 A Dala Horse is actually a very primitively cut horse design, carved from a block of wood, usually some sort of ash or poplar.  Perhaps clear, dried pine or spruce.  They are given a base colouring, usually either orange, white, blue, and even yellow and black.  Then the decorations are applied in a manner not unlike tole painting.  When dried, the horses are heavily lacquered. 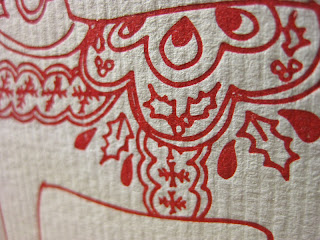 Anna's Christmas card is printed in a "Brick Red" oil based ink.  They are single coloured, without text, both within and without.  The stock used is Neenah Classic Laid light grey card stock.  Size is 4.25 x 5.5 inches (A2, fold-over).  She ran these as a Limited Edition. Anna is still deciding on package quantity and prices.  When this is determined, I will post these cards on Etsy.

That's it for now.  I might add that Anna actually printed these herself, from my own home Studio/ Shop press.  She also did the fold scoring.  Dad helped.

Good Providence in all your Holiday/ Christmas endeavors!