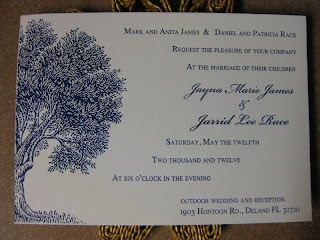 These cards are printed on pearl Lettra, which is choice for this sort of work.  The colors of Jarrid and Jayna's wedding are navy and yellow, so I did some custom mixing, including some vintage tube inks that go back some thirty years.  So, there's the "something old, something blue". . . all that is needed now is the "something new" and "something borrowed". 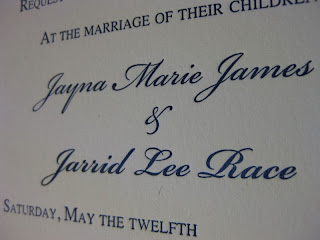 Jarrid and Jayna's names are set in Bickham Script.  The rest of the text is set in Tymes (not Times Roman!)  Some of the photos will show there is a deboss to the print.  Not heavy, but just enough to be pleasing to see and to hold. 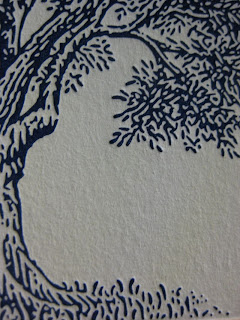 Here is some detail of the tree, trunk and grass.  The card is printed to a full bleed, and some creativity was involved running the 'plate', or die, so close to the edge, and yet still have a side guide, or gauge, to align the paper in the press. What I wound up doing was using a double stack of Lettra, cut one by four inches, taped together with 3m framing tape, and adhered to the very edge of the image. That way the die could imprint to the very edge without smashing on a standard gauge pin. 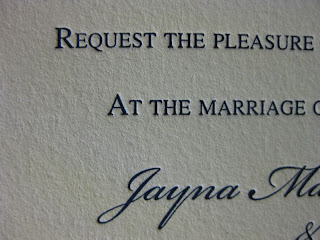 Another shot of the text.  Photographing printed items to show the truthful depth of impression deboss without exaggeration by the shadow and slant is an art in itself.  I'm still on the curve of that art, I'm afraid. 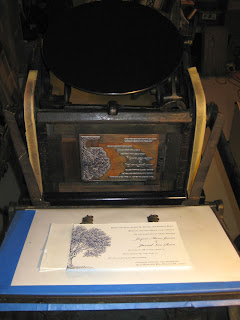 The press used for this job is a 1936 Chandler and Price New Series, manufactured in 1936.  In the world of Letterpress, it's fairly new.   The ink used was a mix of Peacock Blue (Kelsey Inks, 1980), Process blue (Dave's Ink In Tubes), Reflex Blue (VanSonn) and "Everyday" Black (Dave's Ink in Tubes).  Dies are courtesy Owosso Graphics.  Of course, the paper is Crane Lettra, with matching envelopes.
On Monday, the RSVP will be run. It may prove to be somewhat of an event.  Watching the event will be an intern from Mama's Sauce, a student designer, and a Professional designer, plus myself.  Perhaps I'll call for a Pizza, and we'll have a "Print & Pizza Party"!
Stay Tuned!
-gary.
Posted by Gary Johanson, Printer at 10:37 PM