A Study in Contrast


During our last workshop, my student (Isabel, proprietor, 9th Letter Press) was printing the main design of a future "prop card", using Van Son rubber based grey No. 10.  We were using the usual Crane Lettra, #110 Pearl White.  At one point I had her slip in some hard surfaced card stock that we had used as barrier paper, which protects the stock during the cutting process.  This was approximately 100lb hard finished card stock, bright white.  I knew what was going to happen.  Isabel did not.  When the platen opened up, she nearly stopped the press.  The only word she could find was "wow".

We were getting good results with the Lettra.  Nice impression, that tactile deboss that we've become accustomed to.  The reason why Letterpress, frankly, is on the map.  So we were happy.  But something we also became accustomed to was the general softness of the image.  Oh, we can have a 'hard' edge with Lettra, and we can have saturation to a very high degree.  But there is a look that we get used to.

The open fiber nature of unsized paper tends to discuss the imprinted image to a slight degree.  A thin line can be reproduced well.... but a field of several hundred cross-hatch shading lines, or "tints" as they were once called - does not permit the softer papers to respond to the plate or die in the same way that harder stock will.

Harder stock takes a lighter "hit".  Some call it a 'kiss' impression, a term that I think is misleading.  A proper "kiss" from a Letterpress will knock your front teeth out.  There is pressure exerted.  There always WAS pressure.  It just did not penetrate to the rear surface of the paper receiving the image.  But oh, yes, there was definately an 'imprint'!  We looked for it in 1969 in trade school, we looked for it in 1973 on the pressroom floor, and some papers received quite a bit of "kiss".

Hard stock, however, stays flat, the paper surface does not rise beyond the type or die face and onto the shoulder as the print surface makes contact with the paper and impresses. The face, or print surface, is conservatively inked. Once the impression is made, the ink tends to reside on the surface of the paper.  There is no discussion, or diffusion of the ink upon open fibers.

The result is a more saturated color, and a very fine articulation of fine-line detail.  Overall, higher contrast.  In the case with Isabel, the image literally 'popped'.  A very stark contrast is seen between the presentation of this same image, with the same ink and same pressure on Lettra.  Don't get me wrong, the image on Lettra was indeed nice.  And, in fairness, the harder stock added to the contrast effect by being a brighter white.

So, I decided to do some comparison with both the Gray No. 10, and "Everyday Black", courtesy Dave's Ink In Tubes, my new go-to for ink.  The photographs that follow are the results. 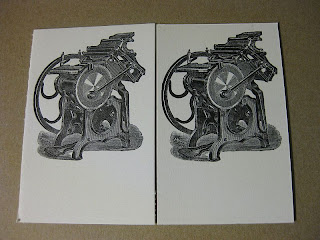 These are images of an 1890 Old Series C&P, printed from an 11g. copper advertising cut of the era. The color is black.  The paper on the left is Lettra.  The paper on the right is a harder Canson cold press.  The Canson has two sides, one side holds an extruded finish, the other is smooth, and a bit harder.  I chose the harder side. 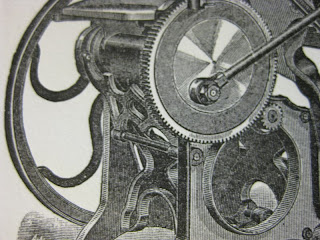 This is a close-up of the black on Lettra.  The image has a reasonable deboss such as is appropriate for this image.  The photo is a bit blurry, I did the marco shots without a tripod.  Sorry.  :) 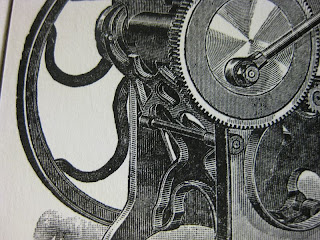 This is the same image, same run, colour, pressure, on the canson.  While I mention pressure, I did try to see if increasing pressure would darken the image.  It did not, it only reduced the articulation.  Thus I was careful to keep the pressure of the 'strike' the same, as much as I could tell. 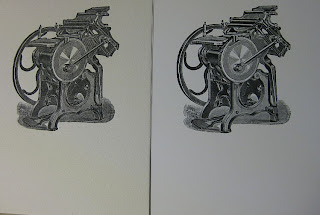 The above image was printed in No. 10 Grey.  Lettera is on the left,  the hard finished 90 or 100lb card stock is on the right.  The finish of the card stock is similar to that of a standard index card. 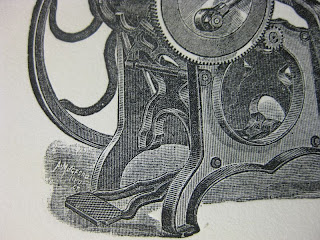 This is Grey No. 10, same pressure as the black Lettra version above.  It is predictably lighter, but a close view shows the individual cross hatch lines are distinct enough to provide a fair degree of articulation.  Really, not a bad impression at all.  And we purposely chose this colour because we want the text that will be added to dominate attention.  After we ran a number of these impressions, and I was sure the ink had leveled, I had Isabel slide in the harder card. 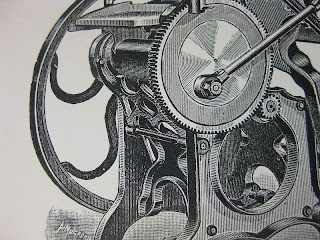 Can you see where Isabel's "wow" came from?  (hopefully, you are thinking "yes". Otherwise, boy, will I feel stupid.)  The gray is almost as dark as the black, largely owing to the paper's natural color, a bright white.  But what is amazing to me is the fine-ness of the tint lines, the shading lines, which are micro-thin.  The Lettra sample reproduced these lines well, but the hard stock permitted a contrast and a fine-ness that made the image fairly jump off the card.

This is where Letterpress comes into it's own.  You can get fine lines from offset lithography, sure, but you will never get this kind of contrast.  You don't get that 'pop'.  This effect can be taken to the next level by trying gloss card stock, like Krome-cote.  We used Krome Cote back in the early '70s for the business cards of the executives at Clarklift Central, Orlando FL.  We ran the olive green solid colour 'shells' on a 1250 Multilith and an 1850 Multilith.  But the text was printed by moi on our 12x18 New Series Chandler and Price, set by Linotype at the old Orlando Graphics on Sligh Avenue, Orlando . . . in a time long ago and far away . . . .  The executives agreed that the names, titles and text data on the card looked far better typset and run on our platen press than when run offset.  This was long before Martha Stewart, folks. Never let it be cried in your ear "golly, if we don't deboss....might as well do offset or digital!!  Who will know the difference?"  Baloney.  The difference will be evident, believe me.  Yes, even with a "kiss" impression.

I hope you enjoyed my little 'show and tell', and maybe helped to generate some ideas out there.  Letterpress is so much more than punching paper.  In fact, the prowess of the Letterpress can - in some ways - be wholly missed if we ignore the beautiful, awesome original and traditional uses thereof.

Good Providence in all your Letterpress endeavors!