"I Thank My God for Every Rememberance of You...." 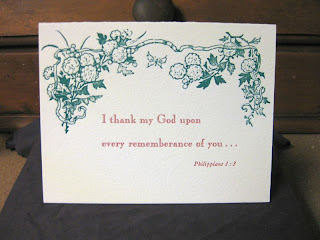 Such was the Apostle Paul's heartfelt greeting to the young Church and Philippi. To many of us, these words characterize the most warm and embracing thoughts of rememberance.  We captured these words as part of a greeting and note card series we are hoping to offer in 2012.
My last installment showed the frame.  Since these cards are being given out to associates and friends of ours, we felt it appropriate to post the full description and photo essay until now.
A brief description: These cards are pinted on both Neenah Classic Laid and on Crane Lettra, 110#.  The size is A2, 4.25 x 5.5 inches. They will be offered for sale in Lettra, with matching envelopes.  The wreath is green with just a touch of blue to tone it, and the text is cranberry.
The florals were originally a woodcut created in the late 1890s by Derbeny et Cie, Paris.  The text is handset in open face Caslon, 18pt.  The process of printing, of course, is hand-fed Letterpress using my trusty 1936 New Series C&P 8x12.  The music that saw these cards through the processing, scoring and cutting was probably Beirut, Iron and Wine, and probably some Bridget Bardot from 1967.  Music is important in my shop.  Everything has a rhythm. You, me, the presses......gotta have music.
We are taking steps to open an Etsy Shop.  We will announce when that happens.  Fingers Crossed: I still have a 'day job' to contend with.  But, as the witch told Dorothy, "All in good time, dearie, all in good time.....and your little dog, too!" 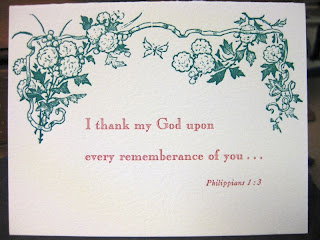 Here is a bit more of a close-up of the card.  It is a horizontal fold-over type card.  One thing I noticed was that Lettra is not great for Calligraphy....it's great for ball point pen!  Thus, it makes a great paper for note cards! 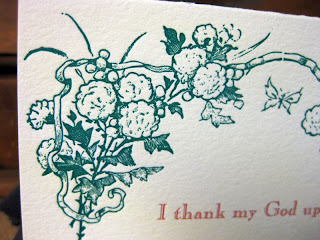 Here is a close-up of the left side of the card.  You might click the photo to zoom in.  These cards are shaded with hatch lines, very fine.  Not an easy card to print.  Originally, these cuts were printed on a polished granite paper.  Open sized papers were not really used for production pieces in the 1890s, although you did see them used for Art pieces, art books, etc.  But in the late Victorian Era, polished stock was King. (Queen?) 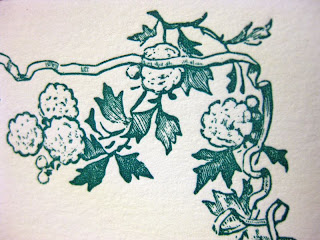 A closer view of the right hand side.  These are either gardenias or camillias.  Just my guess.  These cuts frequented menu and stationery headers in their day. 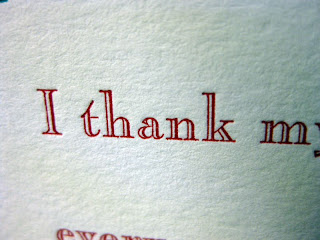 My house font is Caslon, largely because in the 18th Century, it was the predominate face of the Western World.  Even Germans preferred it as a Roman face. My font of Open Face Caslon is used for titling, and is more than likely close to one hundred years old.  We believe this because it came with a lot of World War 1 items.  The font cleaned up nicely.  It is still being cast in monotype by Quaker City and, I believe, M&H. 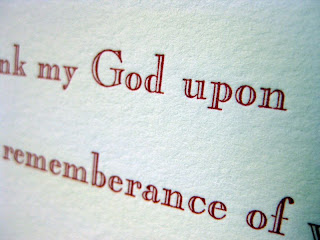 Marjorie, of "3 Toad Press" shared with me that a good way of toning red was the addition of black, which I did, about 7 parts 185 red to 1 part process black.  What resulted was a great, almost cranberry red.  Thanks, Marjorie!! 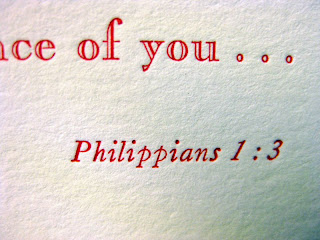 This is a final close up.  The photo was dark, so I lightened it a bit, which brightened the red a tad brighter than reality.  But it's a good clear shot of the 337 Caslon Old Style Italic I used for the address.  I order my Caslon from the same supplier that Colonial Williamsburg uses.  Caslon fell out of favor in the United States by 1810, being replaced by the heavier, bolder faces of Bodoni and the like, which seems to align with the growing feeling of "Manifest Destiny".  Caslon was too gentle, to graceful for the swaggering, westward seeking pioneer spirit that began to dominate the New Republic at the end of Mr. Madison's administration, the successful closing of the War of 1812-15, and the Jacksonian Era.  Alas.....I remain in the company of Franklin, Dunlap and Sellers.  Bottoms up, gents!
A Merry and Convivial Christmastide to you all, and the most Providential of New Year grace us all!!
Gary, the Printer.
Posted by Gary Johanson, Printer at 10:35 AM