Anna's Wedding Announcements were designed by herself.  The original artwork was in Micron pen, scanned and vectorised.  Colours are Teal and Coral. Paper is 140#/300gsm Canson Watercolor.  The colour is identical to Crane's Pearl White.  All text is 'French Script'.  Two Hundred of these two-colour fold-over A7 announcements and 4-Bar RSVPs ran today, plus the scoring of the A7 card.  No mean feat, it was entirely hand fed on my 8x12 New Series C&P Platen Jobber.  Including the time to wash up between colours, blending the colours (Inks: Daves Inks In Tubes.  Thanks for getting these inks out to me so fast, Dave!!),  and all the makeready typical for a job that passes through the press once for each colour, plus once more for scoring, I was on my feet from eleven in the morning until ten o'clock tonight. 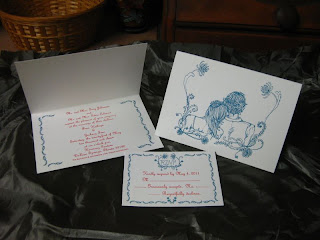 Here is the full set, A7 Fold-over announcement and RSVP card. 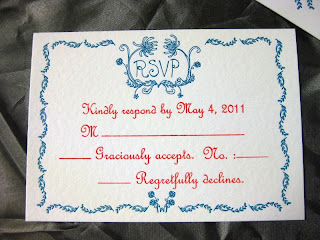 A closer look at the RSVP card. 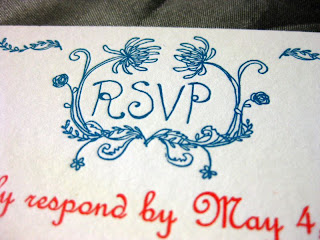 A little detail.  We thought the French Script went well with the airy, whimsical feel of the design.  It is very 'Anna'. 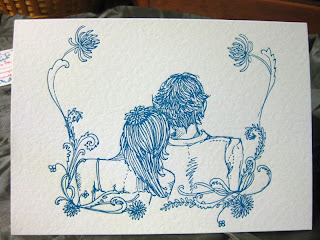 What I love about this card is the cover.  That's Anna and Zac, her fiance.  I think they were sitting on a porch swing. 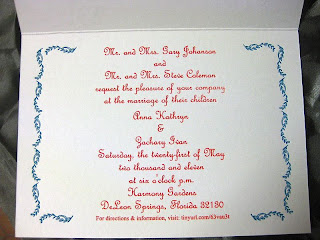 The interior is my design, actually.  I took part of the flora that Anna drew, and using FreeHand, duplicated it in vector, to create the border, and keep continuity. 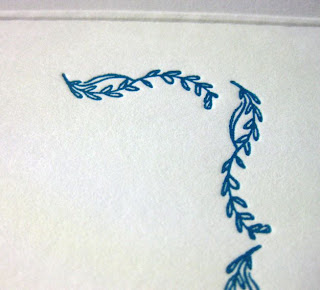 A close-up of the border detail. Owosso Graphics, once again, did a superb job with the metal dies used to make this suite. 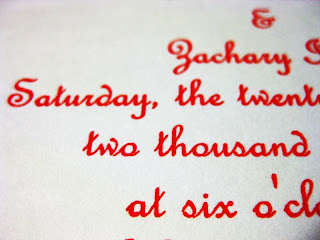 A close-up of the inside text.  While I allowed for substantial deboss of the illustrations, I opted not to go so deep with the text.  There is still a little deboss, but the letters are very crisp and sharp.  Debossing can interfere with sharpness of image, ink distribution on the die must be carefully monitored. 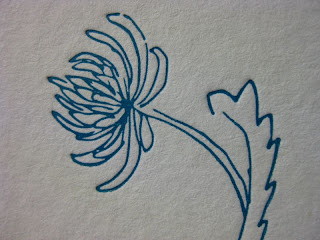 A closeup of one of the dandelions on the front cover. 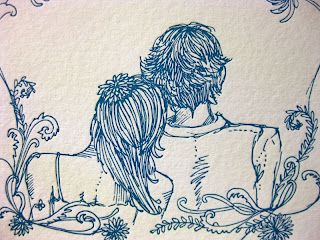 ....and - a closer look at the front cover design.  Anna's wedding colours will be teal and coral, so we repeated that colour scheme with the Wedding Stationery as well.
Well, that's about it for this installment.  Cards came out great!  Special thanks to Nick and Mama's Sauce for the use of his paper-cutter to cut down the parent sheets.  Your a lifesaver, bro!
Good Providence in all your Letterpress endeavors!
Posted by Gary Johanson, Printer at 12:29 AM