These are actually game-piece cards used for training purposes.  I was asked to print some, and since I had the stock, a few border fonts, and an idle Press is the Devil's Play-tool, I thought "why not?" . . . and hence my latest piece of ephemera emanating from the Press of G. Johanson, Printer.  The obverse is the name of an optical product, digitally printed.  The reverse is a two colour rosette pattern and Text.  It reads "W.T.B., with a question mark centered beneath, set in 36p. Cooper Black from Quaker City Foundry, who now supplies Colonial Williamsburg.  They have been supplying me with foundry type since 1991. 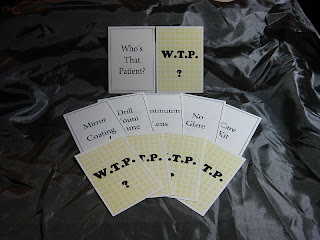 Each deck contains the name of fifteen products, such as "Drill Mount", "No Glare", "Care Kit", & etc., with a title card that reads "Who's That Patient?" Total press run was forty-five.  Total with makeready impressions and registry set: 85.  Not a bad ratio! 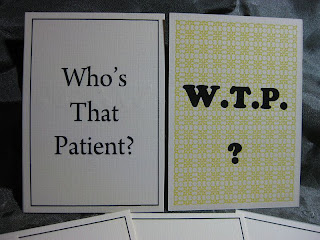 The yellow pattern on the reverse was formed by nearly my whole font of 18pt Rosettes.  I custom blended the oil based process yellow with opaque white at around 15:1.  The pattern is very understated.  I just wanted to hint that it was there.  The white photo light really picks it up. 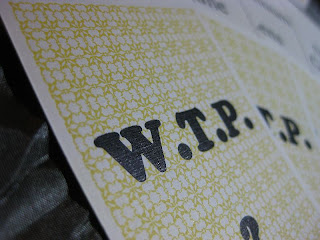 Here's a close-up.  The paper is a natural white linen finished 70 lb stock, which is quite hard.  Unlike Lettra and the open fibre papers, you really don't want to punch the impression much.  It shows on the backside, and you need that flat for the obverse print. 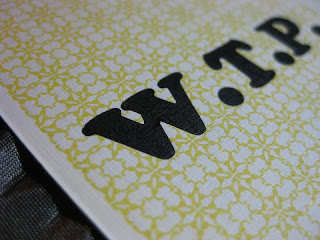 Another zoom-in shot.  I've had these Rosettes for years.  Actually, they are the Traditional English Rose borders that go back to the 17th Century.  Like me. 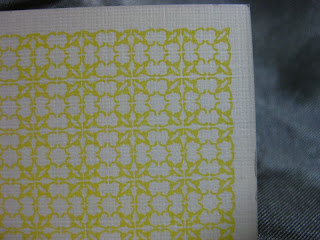 Nice thing about geometric patterns is that you can use them as a sort of grid with which to align your text, if you happen to be using it as a back-drop. 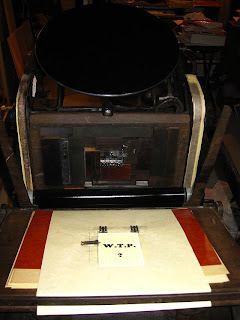 Here is a shot of my New Series Chandler & Price 8x12 motorised platen press.  Obviously, this is the black forme and print. 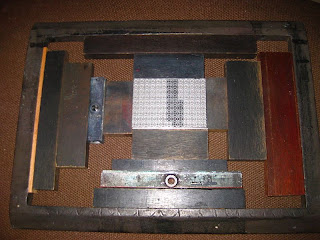 Just in case my client wants more . . . or I somehow mis-understood the order, which was taken down more or less in a rush - I decided to keep the pattern and text formes intact until I am certain I will not be needing it anytime soon. 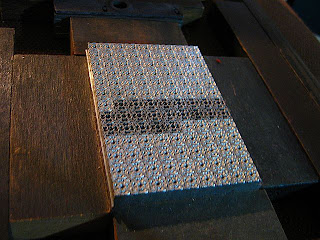 A close-up of the Forme.  Those darker Rosettes are from my earliest sort from QC.  I've since added one more sort to build up the inventory. 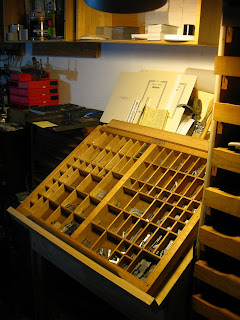 This is the composing position in my Shop.  To the left are "tie-ups", formes on galley trays, and to the extreme right is my towering type cabinet. 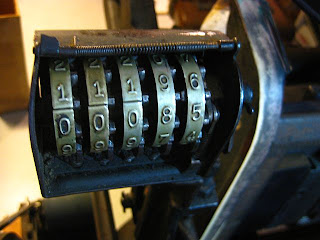 Yup. Eighty-five total impressions.  The ol' brass counter don't lie.  Well . . . yes, it can.
So, what's next on the docket?  Still thinking about doing a publication, gang!  But first I need to build up more inventory.  Like a 22" Challenge cutter!
So . . . that's it for now.  Top o' th' Season to Ye, and good Providence in all your Endeavours, Letterpress or Otherwise!
-gary.
Posted by Gary Johanson, Printer at 10:41 PM