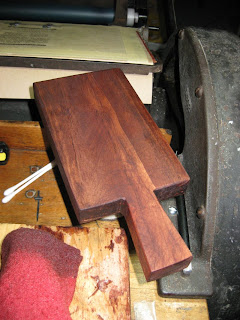 One popular wood used in the period of the American Revolution was cherry. Clear Pine actually bears a grain resemblance to cherry, so cherry stain seems appropriate. The eight blanks stained very nicely. Funny how that even though these blanks were cut from the same cut of Clear Pine, each one looks different from the other. There are no two Hornbooks alike. 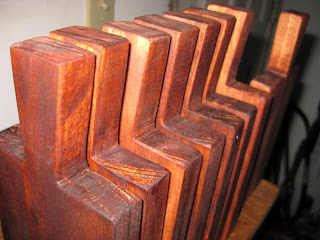 Just like soldiers at attention. Took me the better part of Tuesday Afternoon to get through all these, and another few hours to sufficiently dry. One thing that I noticed that I thought was odd: usually, stain raises the grain fibre. This is why a lot of the New England cabinet makers used to wet down their wood, then sand. The carpenter that I learnt from called it the "hackle". Raised grain is a raised Hackle. These blanks had no raised Hackle after staining. Thus, re-sanding after the staining was minimal. 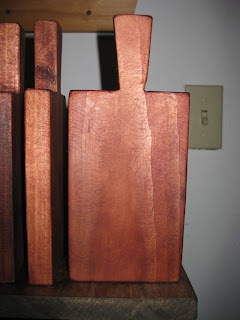 Very satin smooth. It pays to work with good woods. The stain is darker on the end-cuts, naturally, owing to stain absorption. 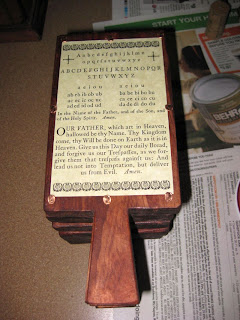 The next step is to apply the copper nails and printed text. Now, here is where I depart from the original Hornbooks by necessity: the original Colonial Hornbooks used a Leaden Frame and a small sheet of Horn for the covering. I could have done the leaden framing, BUT . . . I am offering these Hornbooks to Homeschoolers, Public Schools and Museum / Private gift shops. I do not wish to run afoul the FDA or the State of Florida, or expose any of my clients to any potential health risk related litigation. So, the Lead Framing is omitted in favour of a non toxic water based sealant that applies like Envirotex, but must be painstakingly applied in thin layers, sanded, re-coated, sanded, re-coated, at least six, and as much as ten layers. This process is called Decoupage, and is in itself a process that goes back about a century and a quarter. 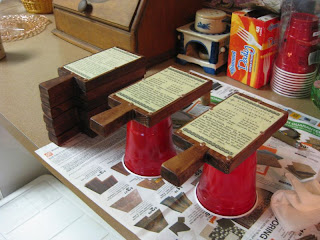 This is the Decoupaging process line, taking up a part of my kitchen. The front, top, bottom, and sides of both paddle and handle are coated and dried for half an hour. After the half hour, the layer is steel wooled or sanded. After the coatings are built up to my satisfaction, they are wet sanded, and polished with steel wool. The whole process can take about three days, unless you dedicate an entire day, sun-up to sun-down, then it might take two days. 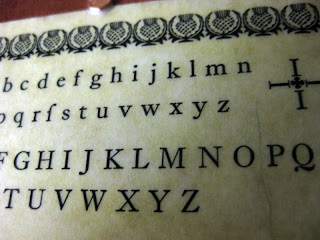 Here is a closeup shot of the "cross row", showing part of the Lower Case and Upper Case rows. The paper is behaving, and actually starting to appear like "skinside" Vellum! The Sealant is giving the paper an almost translucent effect and "floating" the printed images similarly to how pounced vellum gives an almost floating effect to gall-iron based inks. 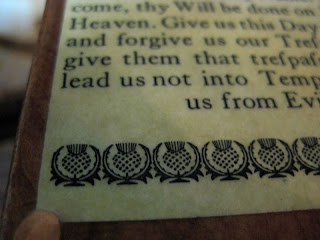 Here is a close-up of the Scottish Thistle Border motif. This font came from Quaker City Type Foundry of Honeybrook Pennsylvania. Bill Reiss has awesome turnaround and a great selection of classical figures and ornaments. Another foundry that I use is the foundry that - according to the old Hall of Printing that used to be at the Smithsonian - supplied both them AND Colonial Williamsburg, M&H Foundry, San Fransisco, California. Much of my "house-founts" come from both M&H and Quaker City. The tall "s" that you see is an M&H casting. 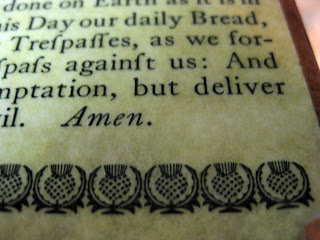 There you go. Tall 's' figures. I secretly wish that I could use them in all my publications, but the 21st Century eye gets tripped up by them. In fact, so did the 20th and the 19th century eye, they dropped this convention right around 1800. This was also the time that Caslon began to fall out of favour with American Printers, being substituted with the less delicate, bolder Bodoni faces.


Well, I am now about one week into these Hornbooks, the last remaining step of the process is the wet sanding, and polishing.  More to come.