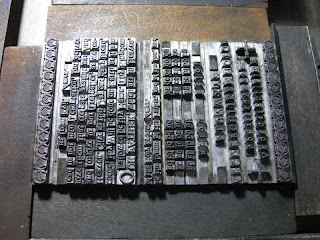 This is the completed Forme. There were several edits, one 'd' was inserted upside down, a few coppers had to be inserted into one of the 'Criss Crosses' to enable a tight lock-up. Oh, heh, yeah, I forgot one of the letters of the alphabet. Figures. 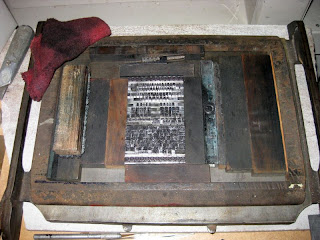 This is the chase lock-up. You cannot tighten the lock-up too much or too little. Two little and the forme spills, and you have a very frustrating pied pile under the press . . . in the oil. Too tight, and you can potentially warp your chase such that it cannot rest level against the press' type bed. BTW, you Kelsey aficionados: notice what I am using as an imposing surface for my 8x12 chases? None other than the type bed of a 9x13 Kelsey. Best portable imposing "stone" I've ever had. And the rails serve as convenient handles! 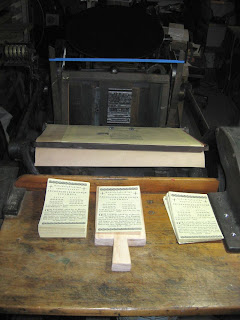 Here is the progress in mid-run. I have one copy laying on one of the unfinished blanks to serve as a sizer. There have been some design changes in this batch of Hornbooks to bring it nearer to it's 17th Century origins. 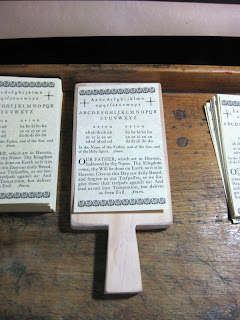 A closer look at the unfinished blank and print resting atop. This gives me a pretty good idea of the finished product. One consideration is the placement of the nails that hold the sheet. It cannot be too close to the edge of the wood, and must also be slightly angled inward. 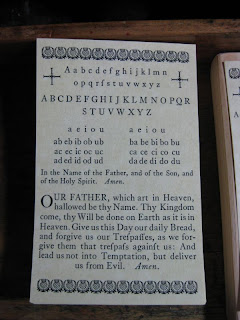 There are three design changes. First, notice the Thistle border. This calls to a Scotts background.  Of course, you know that Scotland was saved from her Norse Invaders by the lowly Thistle? Actually, the ancient symbol was the bent, or broken thistle.  The second change was the addition of the crosses. This is a significant inclusion in that these "printer's crosses" were almost universally used on Hornbooks, even in Europe. These crosses were built up from the upper case letter 'I', either locked together with quads around an ornament as seen here, or mitred together. These were known as "Christ Crosses", which over the years became called the "Criss Cross". At least one appeared at the top, usually before the first letter 'A'. Many used two, bracketing the alphabet in a more pleasing symmetry. The third change is the upper case 'O', using instead a more authentic 24pt. Caslon upper case letter. As mentioned, on my last run of Hornbooks (which was my first run, produced before I had more research information) - I used an ornamental 36pt. Goudy monotyped ornamented 'O'. The letter is beautiful. But it dates to 1920. Not very colonial.