Ok, so I have way too much time on my day off, apparently. I spent a good part of the day designing the tee-shirt for the Central Florida Pregnancy Center's "Walk for Life". As long as I had FreeHand up and running, why not see what we can do with that frame I made up for Q5 Studio.

So, what's a QSL? Firstly, "QSL" is the International Code signal for "Confirmation of Receipt of Message". In other words "Yeah, I heard ya". Now, the thing you must know about Radio History is that from the beginning, wireless communications was a grass-roots thing. Yes, it's true that Marconi had the British Navy equipped with wireless by 1898 and managed to sneak the letter "S" across the Atlantic in 1903. But all during this time, wireless circuits had been published and copied by Hobbyists the world over. In fact these "Amateurs" began to organise, and by the time the Titanic went down, Amateur Radio was firmly rooted, with the U.S. Dept. of the Navy issuing code endorsements. Amateur Wireless operators began to establish themselves on the cutting edge of radio technology, and by the time of the closing of the First World War became seen as an important public service.

As equipment improved - largely due to developments by Hams - so did distances wireless signals could both travel, and be heard. As standard radio frequency allocations placed Amateurs on what became known as the Short Waves, Continental and International communications became not only possible, but eventually - common place.

When one station contacted another station, it became a tradition to send a Post Card confirming the contact. These cards contained information regarding time and date of contact, the frequency used, the condition of the signal, the equipment used, and maybe some personal comments and greeting. These became known as "QSL Cards", and date as far back as the first decade of the 20th Century. 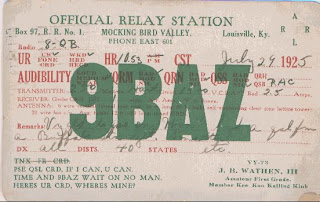 Most of the early QSL cards were printed by Letterpress. Sometimes a standard post card was used with the addition of a special QSL Label. As international trading of QSL cards began to become voluminous, QSL "Bureaus" were organised as a central collection and re-distribution point. Hams would subscribe to these Bureaus which could be a Radio Club sponsored endeavour or a National Organisation operation such as the American Radio Relay League, the roots of which go back to 1914. QSL stamps were often affixed to the envelopes that contained QSL cards sent out to recipients. Thus we have privately produced QSL Labels - or Stamps - being utilised by both private radio stations, commercial stations, QSL Bureaus and Wireless Organisations.

There were other para-postal ephemera that found their way onto the mails. The Ham Radio version of the Telegramme is the Radiogramme, which at one point in time was one of the fastest ways of getting communication in or out of any region. Disaster areas in particular. Radiogrammes were typed up on special stationery, and were usually hand delivered to the recipient. Sometimes a label may have been affixed, corresponding to the old Telegraph Receipt and Commutation stamps of the 19th Century. I've seen only one in the flesh, myself. Heh, in fact, it may have been mine. Oh well . . . .

Shortwave Listeners - who were not licensed Amateurs in that their hobby involved only listening and logging the signals they could pull out of the Ether with their usually hand-made receivers - would send reception reports to Short Wave stations and receive in return a QSL Card from the commercial (or otherwise) station in return. At one point, Domestic and some foreign broadcast stations issued "EKKO" stamps. These were beautifully engraved designs executed by the American Banknote Company - a company that at one time produced regular postal issues for the United States Post Office Department. 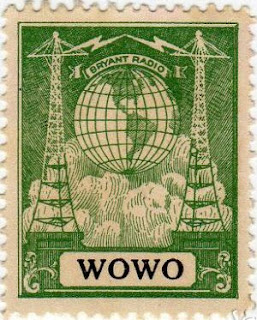 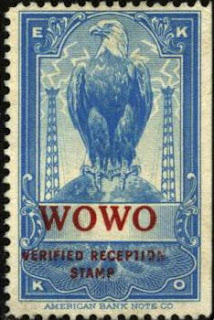 This is and example of an EKKO stamp. Both of these come from Fort Wayne's "WOWO". When the sun goes down you can still hear this Clear Channel powerhouse just about anywhere east of the Mississippi. Brings back a lot of memories.

Ok, one more design from Q5. See those wires on the ship? This was wireless in the heyday of Spark, when a radio signal sounded like a medium-pitched buzz sent at a code cadence. Some of these big bruisers ran several Kilowatts of raw spark. Talk about ozone! When Debernet et Cie. engraved this center cut in 1910, a radioman's position was a guaranteed Officers Commission. They used to call him "Sparks".

That's all for today. Another eccentric post and another piece of oddball history.
Welcome to my world.

Good providence in all your endeavours, and give a listen on the old AM Broadcast band one clear night. You might find yourself unexpectedly entertained. And hooked!
-gary