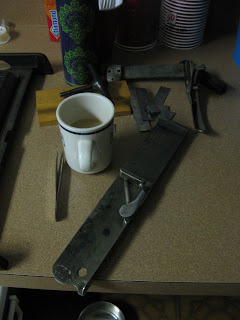 So, what's been happening at G. Johanson, Settlement Printer lately?
This year's Fall Country Jamboree, held annually at the Florida Pioneer Settlement for the Creative Arts falls across the weekend of the November 7 & 8th. Unfortunately, I have to work this particular weekend, so as to provide something to give to visitors, I produced a small "Broadside" - it can be debated if any "side" of this print can be considered "broad", but since presswise I am confined to a total print area of 8 x 12, which being translated means 7 x 11 max areacoverage, we are working under some design size limits. 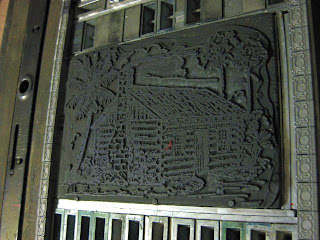 I decided to employ a fortunate find, of all things, a vintage zinc cut of . . . a piney-wood cabin in what is most definately a deep southern wood! What are the chances of finding something like this? It could have been one of our cabins on the campus! I've lived in Florida long enough to remember the hunting cabins that dotted the Forests and streams of our fair State, many of which were constructed during the Depression by the WPA. 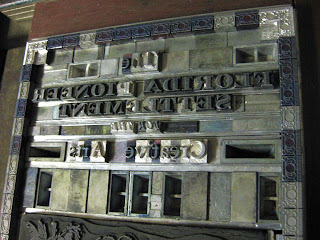 I chose a monotype border, some of which I supplimented with new castings from Quaker City. The title fonts are Old Style Caslon 24pt, a vintage sort over a century old obtained from an estate at Dunedin in 1991, and Litho Shaded 18pt., which has suffered some damage over the years. The slight damage was taken advantage of to lend a sort of "distressed" rural/ primative aire to the piece.

I intend the main portion of the Forme to constitute a "shell", with a broad opening below the cabin cut to insert other events. The "Broadside" described here will contain the insert "33rd Annual Fall Country Jamboree, Nov. 7 & 8", set in Caslon Open Face 24pt.


The press used is my '36 "New Series" Chandler & Price 8x12, the workhorse of my home shop. It is motorised and belted down to around one impression every three seconds. I can go much faster, but what's the hurry?


I found some 67 lb cover stock that looked fairly vintage, 100% rag from what the wrapping said, and I already had some 110 lb Crane Lettra from a prior job. The 67 lb cover will be used for a souveneir hand-out, and the Lettra will be used for the limited-edition print version held in reserve for Settlement Staff, Volunteers, Board members, etc. These will be signed and numbered.

I took some shots of the two sheets, with some close-ups on the Lettra. The other paper, the 67 lb stock, is much harder, of course, and no deboss was attempted. The Crane Lettra debosses quite naturally, rendering a pleasing effect upon the overall look of the piece. 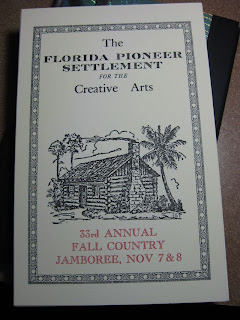 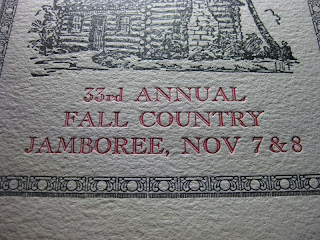 Here is a close-up of the Litho Shaded font. 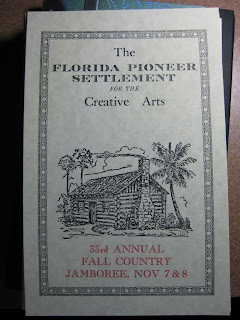 This is the souvenir sheet we will be handing out during the Jamboree. 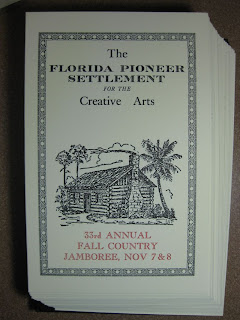 These are the limited edition on handmade Crane Lettra 110 lb. Ecru stock 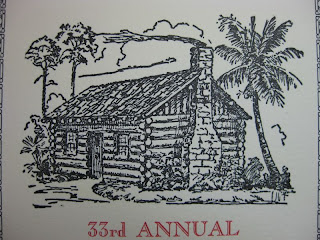 Here is a close-up of the Cabin zinc cut.

I ran 496 of the souvenir hand-out broadsides, and 25 of the "limited edition" versions, which will be signed and numbered.

The overall appearance reminds me of the front of an old Almanac from the early 19th century, honestly. Which may spark another idea down the road.

Well, that's it for now. Hope you've enjoyed looking at the photos and reading the descripions. Even more, I hope you can make it to the Florida Pioneer Settlement's Jamboree, always the first full weekend of November. Later, in December, we celebrate a "Florida Christmas", another peek at Florida's pioneer roots.