It all started with these two, fairly common stamps, shown below. The first is the 1923 Harding Commemorative.  President Warren G. Harding died suddenly on his return from an Alaska Trip in 1923.  He made it as far as San Fransisco before he died.  Why did I select Warren Gameliel Harding as a subject?  Well . . . heck, is that portrait cool or what?  I mean, that's one awesome profile.  I wanna grow up to look like Warren G. Harding!  Ok, and another thing: Harding has a unique place in Broadcast History.  The very first broadcast from Westinghouse's 8XK / KDKA, Pittsburg Pennsylvania experimental radio station was the Harding-Cox election Returns.  Harding was the first president to have his election covered by the new medium of Wireless.

Another aspect of this project: to demonstrate the reproduction of fine detail via the medium of Letterpress.  Letterpress is not new to Postal Ephemera, of course.  Just after the 1840s, Great Britain turned from intaglio engraving of postage stamps, to surface printing.  Surface (Letterpress) printing carried the burden of postage stamp production for the most part, in Europe for about one hundred years.  There is no question that these stamps were designed with a high degree of detail.  Detail that I don't see very often in today's modern world of Letterpress. 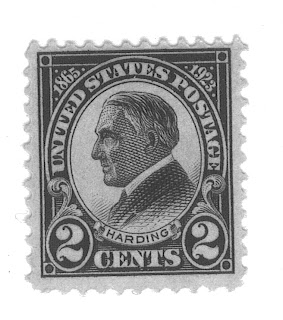 Now, the United States continued it's practice of engraving of it's postal issues.  In fact, the only examples of surface printed postal ephemera from the States will be found in their Postal Stationery issues, and in their Postmaster Provisionals which were used prior to the issue of Government printed stamps in 1847, or the Postmaster Provisionals of the Confederate States.

The design for my Amateur Radio Postal / QSL labels would be derived from the profile portrait as seen in the above Harding stamp, and the frame of the stamp shown below, which is part of the 1923 regular postal issue.  All denominations shared the same frame and legend, featuring different presidents and personalities from American History, such as Nathan Hale, shown below. 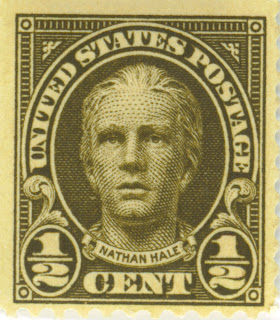 I redrew the frame and acanthus leaves above the denomination.  I removed the legend, denomination, and "cents", leaving only a sort of brickwork pattern.  The challenge: can I hold these fine lines on a copper letterpress die, and further, can I print these fine lines? 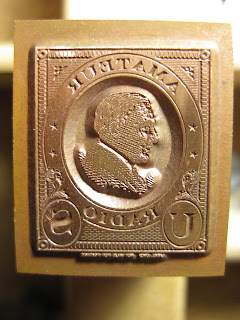 I had a rough time finding a plater that really understood what I needed, which was intaglio engraved fine-ness on a copper relief die.  Compared to the printed work executed by Harpers Weekly, the GPO, the old Imperial Reichsdrukerei, Derbeney Paris, and other printers of the last century, mainstream Letterpress work today seems to be almost primitive.  Most of the platers that do copper work seem to have become accustomed to today's artwork, and "choke" on fine cross-hatch on images that measure less than six millimeters. I made no less than four separate dies before I found a company that did a job that approached what I was looking for.  When the above die arrived from Metal Magic, I was stoked!  The image measures 19mm high, the portrait of Harding measures 7mm.  This is truly a miniature work of art. 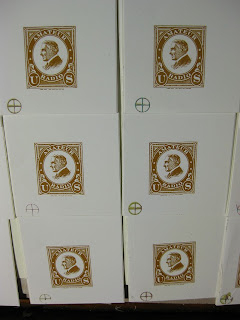 The registration marks were already on the paper, they had nothing to do with the printing of these labels.  The paper that I used was a polished adhesive with a peel-and-stick back.  Pulling an acceptable print was almost as hard a job as it was having the die made.  This was largely owing to my own acclimatization to Lettra and deep deboss design.  The first thing I did was over-ink the press. Using hard surface stock is necesary for fine detail designs, and very little ink is required.  Also, very little pressure is needed to transfer the image.  Since the die contains fine hatching, it is very easy to "plug" these fine lines on the die, so ink had to be applied by the littles, and brought up slowly.  Packing was hard, using Red-board just beneath the tympan sheet.  I did not want a 'spongey' packing. 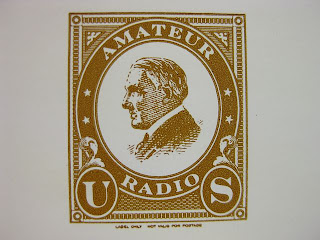 It took me over an hour to level out the ink and adjust the packing.  The die would ghost annoyingly.  As it turned out, I had the rollers taped higher than usual for the last job I ran.  Finding the right roller height, the right packing depth, the right level of ink, I was finally ready to finally run.  The above image is the result.  Compare it with the Harding and Hale stamps above.  I was actually pretty pleased with the result. 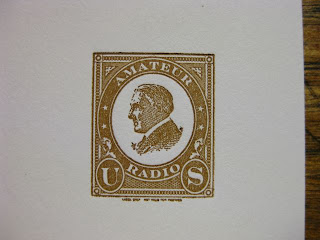 I tried using Lettra and other types of Letterpress stock, just to see how it compared to the polished hard stock. I couldn't get nearly the detail.  If I were to add ink to darken the image,  I would sacrifice a lot of the detail.  Printing on open sized papers, and printing on hard and polished stock are two different worlds!  "Kiss impression" is imperative for really fine detail work. 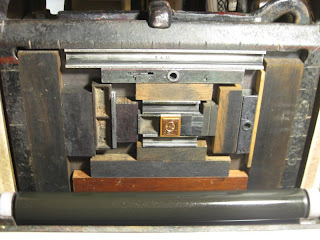 The smaller the die, the harder the lock-up. Care must be taken to arrange the furniture such that the pressure focuses from the inside out.  It is too easy to create a lock-up that bulges out the small center forme or die with too much pressure.  In this case, the answer lie in artificially "widening" the width of the die to create a larger area on the top and bottom, to spread out the pressure. 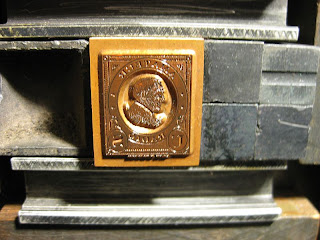 Above is a close-up of the lock-up.  The curving of the furniture is distortion from the camera's "taking" lense.

So, what I re-discovered was that Letterpress Printing with an eye for detail is an art unto itself, requiring not only a fine line quality die, but also paper suitable to transfer a fine line image upon, a carefully managed level of ink to adequately cover, but not plug the detail of the die, and proper packing.  All of which is considerably different than the prep work that goes into today's typical ink-and-punch work.  You, know, both have a place in the Letterpress Universe, to be sure.  I do a lot of  "ink-and-punch", taking care not to damage my equipment, of course.  But it is far more satisfying for a guy like me, who grew up with those beautifully detailed postal designs, to print images that simply speak "artisan".  But then again.....if you speak "photography"..... I am an ASA-20 medium format Pan-Atomic sort of guy who lived and died by Microdol!!

Oh, if you have not already, please check out our new "Paper Wren Press" web site!  It's still under construction, as is our business, but we are welcoming visitors.  Feel free to drop me a line, too, at gary@paperwrenpress.com

Posted by Gary Johanson, Printer at 12:58 AM