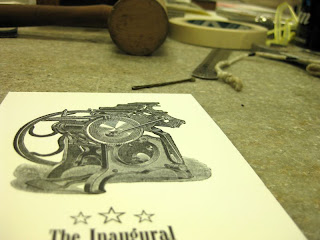 Well, it came quick, and ended all too soon!

It began as an idea that I posted on the Florida Letterpress Yahoo Group's list page.  Gosh, there really are no Letterpress Wayzgoose events happening down in the Deep South.  Why not put one together here in the Sunshine State?  TBAS Letterpress Coordinator Carl Nudi and Director Prof. Richard Mathews agreed!  That's what started the ball rolling.  Carl and Richard run the University of Tampa's Tampa Book Arts Studio, or "TBAS".  Thus, the show was on.  We were privileged to have many guest speakers, demonstrators, artisans of several disciplines which find commonality in what we call the "Black Arts".  There were about thirty in attendance, beside the speakers and feature demonstrators.

It was a full Saturday, and for my daughter (Anna Coleman) and me, it started Friday morning at 9 am.  We arrived to help Carl set up, get things into register, and on my part, to get the platen press ready to print, and compose something to print with.  Finally, after a long day, Anna and I drove up to New Port Richey to stay with some good friends, who came to the Wayzgoose with us on the following day, Rebekah and Alton  Shady. (In on of my Fall entries, there is a video of Alton is running his own wedding stationery on one of my presses.)

Here is how Saturday went:

We convened at 10am for coffee, cookies, and introductions.  This was our "Chappel Meeting".

From 10:30 - 11am,, we featured:
-Intertype typesetting, with Henry Wehle and Don Black, offering a neat souvenir line with a penny cast inside!  Hey, Don!  That's what I call "Heavy Metal", wot?
-a Bookbinding Demo, with our new resident artist from Asheville NC, Bridget Elmer.
-C&P Platen Press Printing with your's truly.
-Handpress Printing on the 1848 Hoe & Co. Washington press, which belonged to woodcut artist and illustrator J.J. Lankes, printing a keepsake from an original Lankes cut.

From 11 - 11:30 we featured:
-Letterpress at the Peter Pauper Press, a presentations created by J.B. Dobkin and Sean Donnelly, covering the early printing at Peter Pauper Press, utilizing editions from the TBAS Special Collections, and presenting a new book on the subject printed by the University of Tampa Press.  This was the official release, and copies sold were signed by the authors.
-Vandercook Press Printing demo, Bridget and Director Mathews producing a "duotone" print, a two colour key + colour (red) print from one of Donahue Publishers original childrens storybook publications from around 1914.  The story of the recovery of these Donahue Electrotypes by Les Feller is the stuff of Indiana Jones!  Traipsing through abandoned buildings being demolished, finding at the last minute a vault, whoo man!  Grabbing all these priceless treasures under the shadow of a wrecking ball, who said Letterpress wasn't exciting?
-Intertype typesetting, again with Henry and Don.
-Ludlow typesetting, with Carl Nudio. I got a crash course on this the day before, and was able to cast my mini-broadside for the Platen Press, take off the spurs, true up the lines on a Hammond Glide Saw, and spoil myself rotton doing my very first line cast lock-up!  Man, I wanna Ludlow!  Oh, and a Hammond Glider.  Oh, and hey, a Supersurfacer might come in handy.  Just sayin' . . .

We had lunch from noon till one, with several eateries to choose from in the local area.

From 1-2pm we spotlighted:
-Papermaking & Bookarts, with artists Peter and Donna Thomas.  I wish I had time to photograph the 'gypsy wagon' they came with!  Here we got to see the Holland Beater in action, as Peter made a sheep of paper before our eyes!  On display as well were the samples of work done by Peter and Donna, who have been book artists for over 30 years.
-Paste Paper with Kendra Frorup of the University of Tampa Art Deptartment.  This was an interactive demo.
-C&P Platen Press Printing, me again!
-Monotype casting, featuring Rich Hopkins, casting ornaments from "Orphan Annie", TBAS's Monotype caster.
-Vandercook Press Printing, With Bridget Elmer and Richard Mathews

From 2-2:30, Rich Hopkins gave an excellent talk on Tolbert Lanston and the Monotype, the Origins of Digital Type Setting.  An amazing insight into an amazing machine constructed in an amazing era of iron and steam.  Richard featured materials from his book which bears the above title.  Richard autographed copies for us here at the Wayzgoose!

The rest of the day interleaved various portions of the above features, so everyone had a chance to see just about everything we offered.  We adjourned at 4pm, however, afterward we who staffed the event were treated to a mini concert by Peter Thomas, featuring Letterpress Folk-songs That Few If Any Really Know.

And now, the photos! 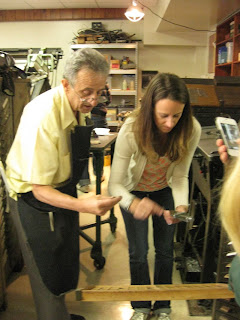 Carl Nudi showing how to set mats in a Ludlow self centering stick. 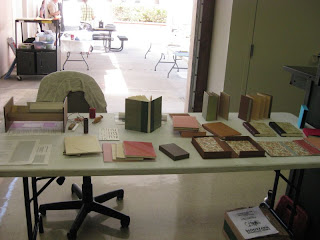 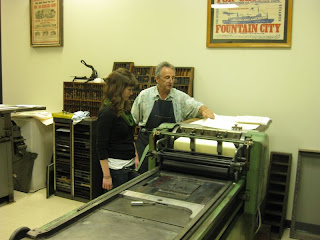 Anna helps Carl set up and proof with the shop's 1947 Vandercook. 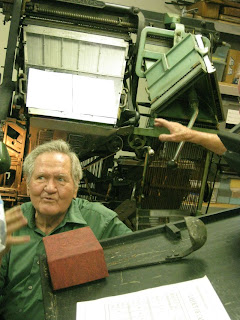 Henry Wehle, and part of Don Black's arm.  I think they were describing the same thing. 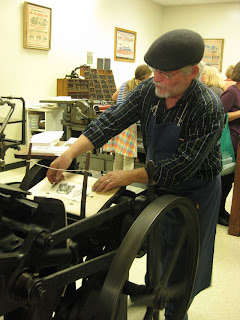 Whew! I finally got the mini-broadside straight! 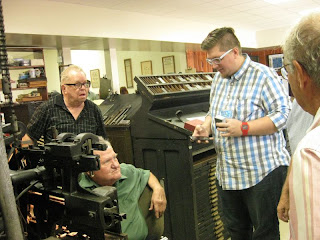 Don, Henry, and Rich chat with Matthew, one of our Letterpress guests, while he looks at an Intertype-set type line. 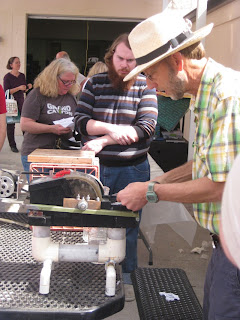 Peter Thomas feeds the Holland Beater at the paper making demo.  This was an awesome highlight.  Thanks, Peter and Donna!!  Next time, I'll get some shots of the Gypsy Wagon! 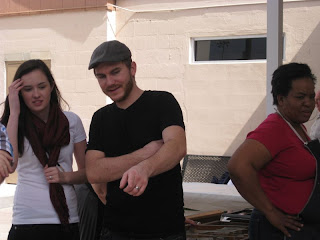 Did I wear my pants inside out?  Alton and Rebekah are not sure.... 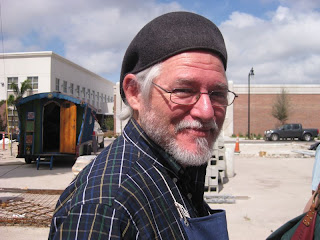 Anna caught me at the Paper Making demo with cap in "press position". 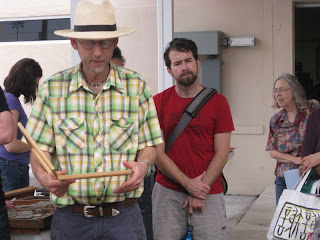 Peter opens the deckle to remove the paper 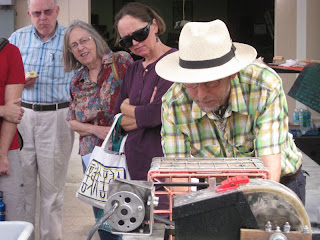 Which is then pressed (using a car jack!) The "paper press", essentially a heavy wire cage, a car jack and a board, is behind the beater. 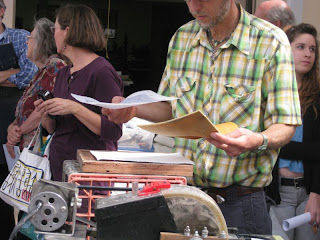 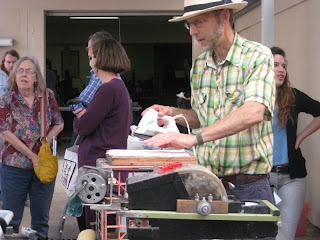 Helping things along for demo's sake with a hot iron. 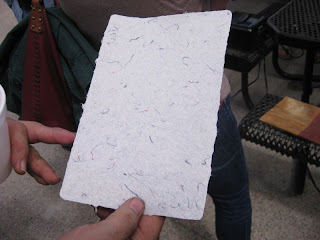 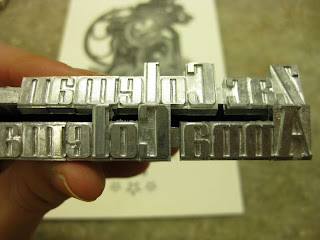 Anna cast her and her husband's name on the Ludlow in condensed Bodoni Bold. 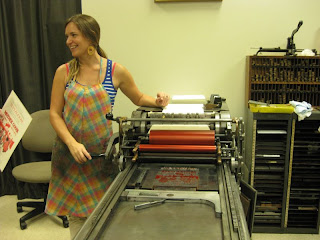 Bridget is here running the red Donahue electrotype on the smaller Vandy. 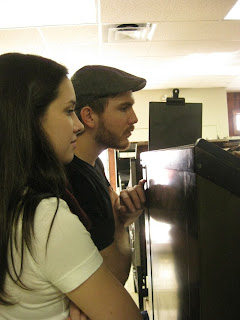 Hey, Alton! You seem rather absorbed in the Ludlow! 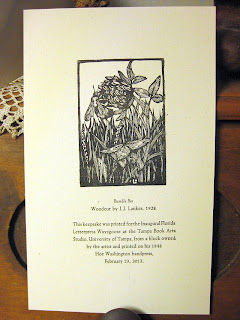 This is the souvenir sheet pulled from the 1848 "Lankes" Washington press. 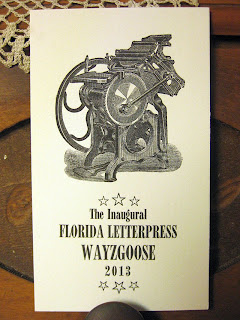 This is the mini-broadside pulled from the C&P that I was running. 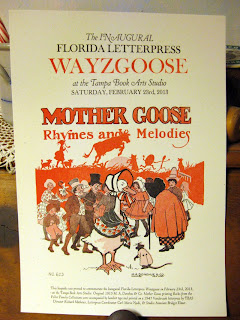 And this is the souvenir sheet Broadside from the two Vandercooks.  Originally, the other two colours, cyan and yellow would have been run for a four-colour print as it was done originally in 1914.  However for practicality's sake, we thought to limit it to two colours, key black and red.

At this point, let me sign off with a short video that Anna and I took at the Wayzgoose.  We could not cover everything because of my responsibilities that day, but between us, we at least caught the feel of the day.

That's it from the Florida Letterpress' Inaugural Wayzgoose. See what happens when you pop an idea?  It just might . . . . . happen!