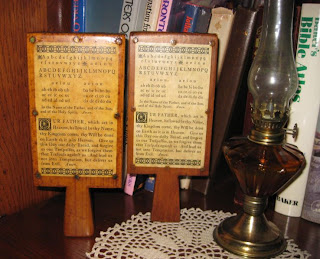 "In 1647 the Massachusetts government passed a law requiring that all towns except very small ones must provide schools for the children. This was the first law of its kind passed in the colonies or in Europe. The law began by stating that in the past it had been 'one chief point of that old deluder, Satan, to keep men from a knowledge of Scriptures . . . by keeping them in an unknown tongue . . .' To encourage reading and to prevent learning from 'being buried in the grave of our fathers', the Massachusetts ['Old Deluder Law'] ordered: 1 - That every town having fifty householders or more should at once appoint a teacher of reading and writing and pay him out of town funds, and 2 - That every town having one hundred householders or more must provide a school good enough to prepare young men for entering a college or pay a penalty for failure to do so."

The Massachusetts Bay Colony was simply carrying on an Old World tradition. The "entry" years of education always involved "reading, writing, and cyphering". Over the years, simple visual aids had been developed to assist in these basic elements of primary education. Even during the Dark Ages, a simple condensation of Alphabet, Cypher, Phonetics and Scripture (which provided the main impetus for literacy in Europe) was used as the first introduction to literacy. Engraved in soft metals, wood, ivory, vellum, later printed on paper and mounted on wood, these visual aids served as the first text "books" for formal education. By the 1600's, the most popular of these items were the "chap book", and what we are focusing on now, the "Hornbook".

The traditional form of the Hornbook resembles a small paddle, no doubt helpful to the teachers. After the introduction of printing, the local printer would set the alphabet, upper and lower case, simple phonetic exercises, and then scripture. Usually the "Lord's Prayer" was used. The term "Hornbook" derives from the covering used to shield the printed text on paper from the elements. The artisan would take horn from the animal and heat it until it became pliable. Horn has somewhat a laminate property, and under heat horn "layers" can be stripped into thin sheets. These in turn were cut to size and mounted over the printed text upon the broad, flat area of the "paddle". Some examples still retain the leaden "frame" that was often used to secure the horn and paper to the board. Over the years the horn rotted away. I have not seen any examples of Hornbooks which still has the horn intact.

Often, a Cross appeared in the upper left hand corner of the page. This is nicknamed the "Criss-Cross" or 'Christ Cross'. Some called it the Printers Cross, made from four mitred capital "I"s. It must be remembered that for many hundreds of years it was the Church that sponsored any sort of public education, hence the Biblical emphasis. This carried over to the Colonies, where a formal education was highly valued by Puritans, Congregationalists, German Lutherans and Swiss Brethren followers of Jacob Amman (the Amish) or the Dunkers and Schwenkfelders. Some of the old German publications in my collection mention the fear of having Civilisation dying with them in the deep dark woods of "Pennsylvanien". These groups were the founders of American Public Education. Literacy enables Freedom and secures the blessings of Liberty.

When my daughter began her schooling, I thought it might be neat to make a Hornbook for her, especially since I had a small Letterpress shop with a larger Iron Handpress, a front lever Kelsey 9x13. So following the model I had, which was a photograph of one of the 1600's era Bay Colony types, I made a number of them, most of which by now have been handed off. One is on display at the Florida Pioneer Settlement. I kept two myself, which I use in the following photos which shows different perspectives of my own version. 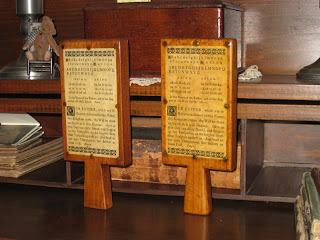 My Hornbooks are made with either Clear Pine, Red Oak or Poplar. They measure three and one-half inches in width, and eight inches from top to the bottom of the handle. These particular examples were printed on hand made paper, held in place by iron tacks. Instead of using horn, which really isn't a good idea, I take advantage of Decoupage, which not only seals the printed page to the wood, but also seals the wood itself. It will not deteriorate like Horn will, yet retains a sort of "vintage" lustre. The pages are hand printed using a font which was in common use during the time in which many of these Hornbooks would have been used. 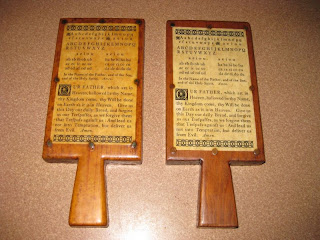 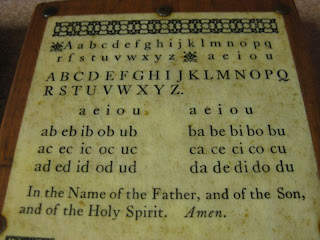 Here is a closeup of the top part of the Hornbook page. What amazes me is how practical these fore-runners to School Textbooks really were. I was able to teach my daughter from just what you see right here! And just what was the quality of elementary education in 1730? Anyone who collects children's texts from the past two hundred years can tell you: very high. My wife, who possesses a Masters Degree in Education has described my Childrens Botany Textbook for twelve year old readers as absolutely college level today. The depth of thought, the level in which the language is handled, an amazingly high level for pre-teens. Perhaps they had more focus due to less distraction than we today? Southern General Thomas Jackson funded a school to teach children of slaves to read and write in the early 1860s. Yes, that's right, Stonewall Jackson. His sister was a teacher. Apparently a lot of high money friends contributed to provide a very high level of education.

Funny how they don't teach this in modern Public School History. Maybe we need Mrs. Jackson to teach today? 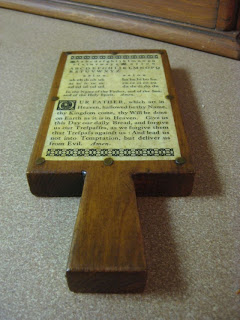 The above photo shows one of my pine Hornbooks stained with a Walnut stain. Sometimes the ends of the handles are drilled out to receive a leather strap. For those who were interested in the Hornbooks I make, I can provide a recess on the back to make it possible to hang these on a wall for display. 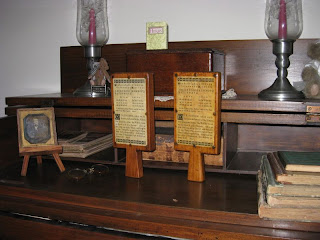 As you can see, I have a "Colonial Room" which houses my photo and part of my book collection. The Hornbooks are right at home here, although in reality their place is in the Living room entertainment unit next to my maple woodcut of a 16th century village which I cut at the same time I made these Hornbooks. That photo on the left? An 1849 mirror daguerreotype still in it's original gilt hinged folding frame. I have some 1860's tintypes behind it, and some of my school textbook collection is on the right. The desk is a hand made pine "spinet".

The subject of Hornbooks is very interesting, and you can learn a lot just perusing the internet or your local library (please support your local library! No firewall needed to read a book!) And if anyone is interested, I am planning to produce Hornbooks again. As far as I know, there are not many producers of these historical items using authentic means and authentic methods. All of my Hornbooks are hand cut, hand printed from handset type onto either handmade rag-stock paper or lignin free natural fibre papers that do not require trees to fall. For printing, I use one of two platen presses, either my C&P or my 1870's era Pearl Old Style Model 3.
If you are interested in obtaining one of my Hornbooks, drop me an e-Mail at:
wd4nka@aim.com

Or write - that's right, pen and ink (or typewriter or word processor) to:


That's it for this installment. Good Providence in all your endeavours!

I remain you most obedient servant
G. Johanson, Printer