Intaglio is the printing of a recessed surface, a carved groove, or gully if you will, etched by a tool, which fills with ink. The raised surfaces are wiped clean of ink, leaving only the ink caught in the carved gulleys and recesses. No matter how small. Even a needle scratch on a polished metal surface will collect ink.

Moistened, somewhat spongy paper is placed atop this wiped plate, and a pliable tympan is laid atop the paper. Then great pressure is pressed atop the tympan, most likely from a stiff iron platen or steel roller, which forces the paper into the etched  grooves, forcing it to receive the ink there.

Intaglio is second only to typography in antiquity, appearing in the early 16th century, and became the illustration medium of choice for fine work. Nothing reproduces a finer line than an engraved plate.

There are several methods of producing and intaglio plate, most commonly - the hand held graver. Various sharp stylii can be used, even iron "needles". Acid can etch copper and steel to form recesses to receive ink. Photogravue, Aquatints, mezzotints ( I think ), dry point etching such as was done by Rembrandt Van Eck, and graver / spitsticker engraving, as used by Dürer, DeBry, even Paul Revere, colonial activist and silversmith. Usually an intaglio press alone costs a thousand or more dollars. Plates are expensive. Tools are available, but you have to hunt for them (try Florida Watch and Jewel in St. Petersburg, Fla.)

But what if you just want to play around with it? Try it out, experiment a little? Maybe do some small scale intaglio to compliment your letterpress endeavors?

Permit me to describe a little method I used at Heirloom Press in Palm Harbor: Vise Cuts. All you need is a sturdy bench vise, a stylus, a 1 or 2 inch square piece of polished aluminium which can be polished on a buffing wheel with toothpaste and water, a square piece of rubber of linoleum, and a couple steel plates from Home Depot.  In the case of this entry, aluminium from a government surplus store.

I used a spitsticker (a type of graver), but I've also used a steel stylus made from the hinge-pin of a door, and also a small round metal iron file sharpened to a fine point. A sharpened iron nail would do in a pinch. You need not scratch or engrave very deeply, aluminium is quite soft. You can get aluminium plates from hardware stores, they need not be very thick, really, and you can glue the plate to a stiff block of hardwood or birch ply to re-enforce it. Use a paper with some spongy give, like cold press watercolour paper, or Arches gravure paper sold at art supply stores.

After you scratch, etch or engrave your little plate, dab regular printing ink, Process Black for example, rubber or oil based, the same as you use for Letterpress does fine. Then wipe it off. I used a small rubber squeegee, but you can even use your finger on something so small as this. You do not have to wipe the surface perfectly clear: there is a personality to an engraved impression, and sometimes the tint caused by residual ink left from the wiping process actually adds to the interest of the image.

You have to make a sandwich: a steel plate atop the plate, which is pressed into the paper (slightly dampened) which is backed by a give-able, or pliable piece of rubber or linoleum. Put this "sandwich" between the jaws of a vice, and crank her down for all she's worth. Intaglio presses exert enormous pressures. After a few tries, you will get the "feel" of how much ink to apply, how deep to etch, and how much "give" you need for the tympan.

The images are not large owing to the limited area provided by the jaws of a bench vice, but it is more than enough to provide an image that can work quite interestingly in concert with your letterpress work. And . . . add real value! Intaglio printing can be pretty expensive, really, and very time intensive as well - not to mention the time it takes to build up the engraving skill itself, but the labour and time spent pays off! And using the above suggestions, you don't have much capital investment, which makes it all the more attractive to me, anyway.

I'll not pose as an expert engraver by any means. I do linoleum and wood. I have engraved my share of end-grain and polymers, but Bewick I am not!! It's all for fun and for the experience. And once or twice I managed to sell some of the products thereof. Point is, you don't have to be an Albrecht Dürer or a Rembrandt to have some educational fun with this venue, and even pull a fairly decent, albeit tiny,  print!

Here are some photos of the process. The plate is about an inch and a half by one inch. The backing is linoleum, though I usually used hard rubber. Padding can be adjusted by strips of paper. The three different papers used was "Gravure", a laid stock;, Arches Cold Press watercolour; and a type of thick hot press. All worked, but the Gravure paper did handle moistening best. 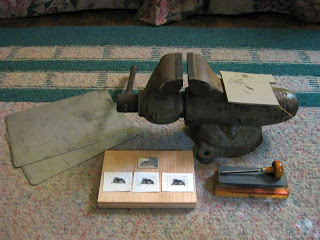 This is pretty much the complete set up. Two steel plates, a hefty vice, a cut of scrap rubber or softer linoleum, a graving tool or stylus - a sharpener should be available, too - a small piece of polished metal, a softer type like aluminium which is pretty cheap, and some paper with some tooth and "give". 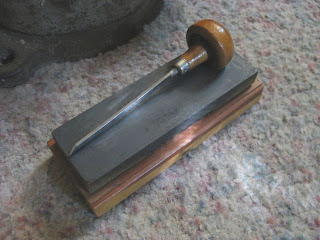 Here is a closeup of what I used on this particular plate. It's a spitsticker and Arkansas whet stone. Sharpness really helps make the cutting of the metal easy. The difference between a graver and a stylus is that a graver leaves no burr, it cuts it away as it gouges, or channels through the media. The stylus leaves a burr. Now, that burr has a unique characteristic all of it's own: it also holds ink. While the line produced by a stylus may not be quite as fine and refined and precise, it has it's own unique character. One of my art teachers likened it to a fine charcoal-drawn line, only velvety.

I do both graver and stylus techniques on my plates. I don't know if I do them correctly, nobody really taught me. I just looked at the old 19th century books on the subject and mostly copied the postures in the pictures. And since childhood, both here and in Europe, the old prints from the 15 and 16th centuries had always fascinated me. Particularly the Theodore De Bry prints. 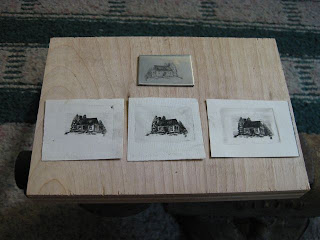 Here is the aluminium plate and three separate pulls on three types of paper. The size of the plate is roughly one and one-half inches by one inch. 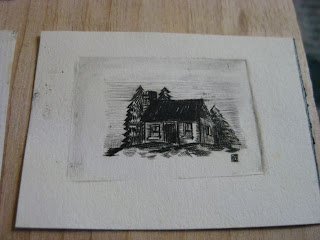 This is the print to the far right. I believe it is pressed into a hot press thick mill wove stock 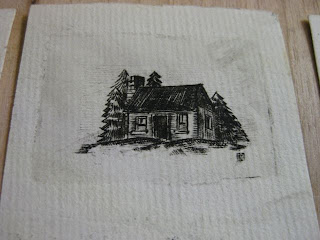 This is the second from the right, the middle print. The paper is Gravure, Laid. 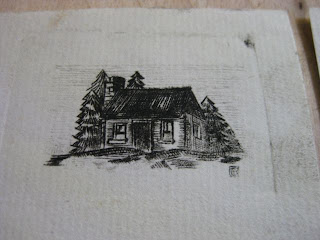 This is the print left of the group of three, printed on cold press Arches Watercolour stock. As you might be able to tell on all three, the impressions were pretty deep, the first probably the deepest. All were slightly moistened before the impression. I held the impression a few seconds before releasing the pressure and pulling the plate and paper "sandwich". 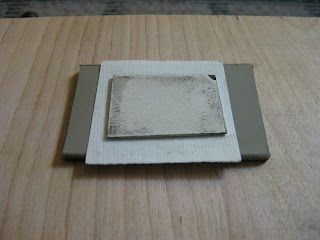 This is the "sandwich". The engraved or etched plate is on top, faced down upon the paper. Behind the paper is the pliable tympan, in this case Linoleum. Sometimes I could find vulcanized rubber sheeting or offset blanket material from the Military Surplus Store, and I would use them for backing. Of course, the rubber lasts a very long time. Linoleum on the other hand, will crumble and split in time, but it's cheap. And usually I don't do more than a few prints anyway. At least so far. 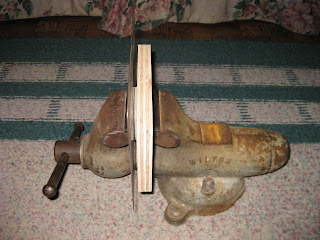 Here is the whole assembly in the vise. From the head-on angle, it might be hard to see the steel plate between the left jaw of the vice and the plate itself. The steel plate is only to spread out the pressure a little bit, maybe an additional 5% of coverage. It also protects the plate. the block that serves as the back, or "platen" upon which the rubber or linoleum tympan is mounted is birch ply. It could be any hard, smooth and even surface. The wood was handy. 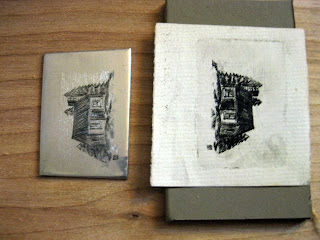 Here the "make-up" is unpacked and opened up. All in all, not bad. Not exactly the Penny Black or Post Office Mauritius, but it is a real intaglio print in every sense of the word, not the worst in the world as far as the image goes (I'm a pushover for cabins in the snow with pine trees!). No Theodore DeBry print, but it was fun and most importantly . . . inexpensive!   That's, uh . . .  my middle name.

So there you go. A touch of Intaglio. Have fun, and keep the presses rolling!