One of the unique features of having a Letterpress Shop, even a hole in the wall like mine, is that you can do things other folks can't do.  Like, for instance, how many of y'all made your own glasses? (Opticians don't count!)

Last night we began the final process of producing Alton and Rebekah's wedding stationery.  This was wholly their design, they just told me where they wanted what stroke to be put where.  Alton and Rebekah are no slouches in areas requiring imagination, creativity, and design.

The initial design unfolded with the idea to create an inner envelope liner made from paper lace.  Having secured a sample, I based the debossed border design after the basic lace pattern.  The result produced an almost Eastlake Victorian design with enough filligree to compliment the text, which will contain flourishes sampled from the work of Ayers, who was an English Scribe of the 17th century.  I tried to do the flourishes myself, but frankly, I don't have that kind of hand these days.  That's why I stick with Blackletter.

The lace design is nestled in the corners, with repetitive elements serving as borders between the corners, again, themed from the central lace design.  The design is "blind debossed" onto a 5x7 vertical card, forming a delicate and very pleasing dimensional visual.

After a very tricky set up (we are using a margin of less than one sixteenth of an inch all the way around the border!), we began the process of debossing from the copper die, courtesy Owosso Graphics, with the press set on it's slowest speed.  It was somewhat tricky to 'feed' this set-up, but after a while, we were up to about one impression every three seconds.  For this sort of thing, not too shabby!  Alton, the groom-to-be, wanted to give it a try.  Very soon, he became an old hand at this.  But then, I know Alton: it was a cinch he would acclimate to my press quickly.  Below is a sequence of Alton feeding my 8x12 Gordon. 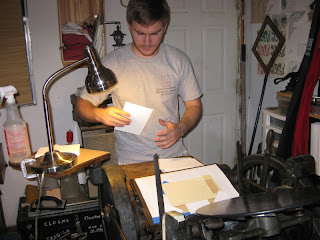 Firt off, Alton "fans" the stock.  Would you believe that 'fanning' is one of the hardest things for me to teach at a workshop?  Fanning is a way of spreading out the stock for feeding and / or counting. 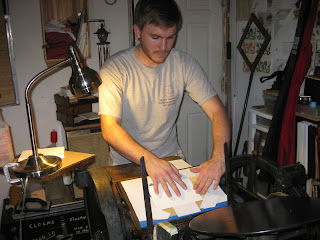 He gently slides the card into the paper guides I rigged up on the tympan.  I could not use my standard gauge pins for this part of the edition because the edge of the paper is nearly flush with the edge of the die itself. 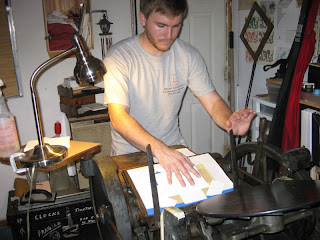 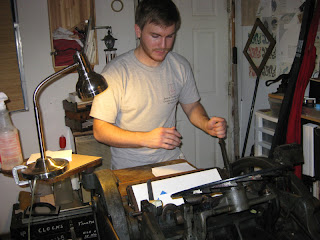 Ahh, yes.  There is is.  Ready to repeat the cycle.

The debossing of the border with "clients" on hand became a type of workshop that I do not always have the opportunity to enjoy: having the client actually take part of the production, with their hands on the Helm, as it were.  It was fun to watch and participate.  Rebekah, not in the photos, was standing on the opposite side of the press watching.  It was just as fun watching her amazement and fascination with the process.  Alton later told me the most important part of the night was the idea that came home with each impression: "Wow, this is really happening!!"  Yes, Alton, it is really happening.  And we are so glad that your Sovereign led you two to each other!

So, what does the design look like?   I took a few shots using a lamp that was recommended by Kim Austin, of Austin Press, San Fransisco, although I have yet to have room for the light tent and set-up. These photos were shot with my sweet wife Cindy's Canon Sure-shot under a 6500k lamp: 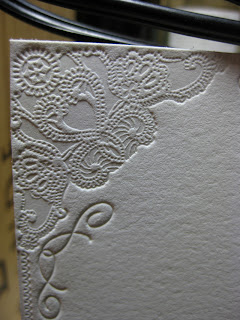 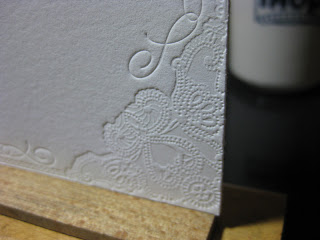 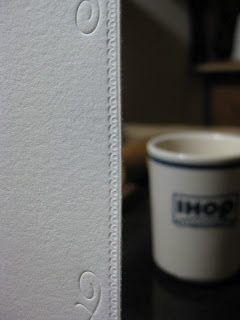 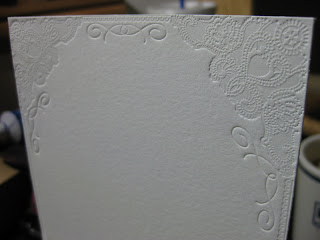 As we proceed with this unique order, I will keep you posted.  As for the design, I will be making this available as one of my border choices available through G. Johanson, Letterpress.  We are naming it after the Bride to Be: Rebekah.  If you like this design, ask for the "Rebekah" Eastlake border.

Good Providence in ALL your endeavours.

Posted by Gary Johanson, Printer at 8:17 AM