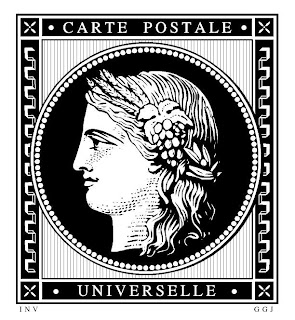 Two hobbies of mine have shaped my life and course of future: Amateur Radio and Stamp Collecting.  It's hard to tell which had the greater affect, as far as avocations go.  As a Letterpress Printer and designer of my products, I draw heavily from the classic works of bygone styles.  Having collected postage stamps since I was six years old ( I'm 57 now ), I find that now, more than ever, I go to my philatelic books, the catalogues and the albums as a design resource for my work.  It seems that as graphic artists these days, particularly those that are fellow patrons of the Black Art, become more and more 'whimsical' in their designs - I guess that's the word for it - I find myself seeking refuge in the sharp clean lines, the inherent symmetry, the fineness of detail, the excellence of execution of postal ephemera of the mid to late nineteenth century.  These classical designs are not "all over the place" or sketchy.  They are solid.  Definite. They have presence, and communicate their importance.  They are works of art.

What amazes me is that amidst the detailing and microscopic fineness (for the most part) lay a vast reservoir of techniques that can speak to us in this "New Millenia" we've entered. Balance, Beauty, Utility, all combine in these micro-miniature posters which were printed around the globe, describing their countries of issue.  Maps, Rulers, Coats of Arms, History, Literature, Cartography, Economics, each stamp teaching those that cared to look a little of their country of origin.

One such design that I have of late worked with in my studio is the 1849 "Ceres" stamp of France.  This was the very first postage stamp ever printed by France, only nine years after Great Britain issued the world's first adhesive postage stamp (the Penny Black and Two Penny Blue, 1840) and a scant two years after the United States issued it's first adhesive postage stamps in 1847.  The designs of Britain and the United States were absolutely gorgeous, and being line engraved, both were intensely detailed.

Not so the French fledgling offering.  It was surface printed (Letterpress, the old catalogs call them as being "typographed").  It was much, much simpler.  It featured no ruler's portrait, no hyper intense turning.  It featured simply a Grecian side border design and an ancient profile of Ceres inset into a simple disc resembling some ancient coin.  And yet in all it's simplicity, the design elements, merely a collection of lines and dots, play together in an amazing unity, presenting a very attractive piece of art.  In fact, so simple was it that I endeavored to reproduce it's elements for my own shop.  To make it very obvious it is not a forgery, I altered the legend (France never issued a Universal Postal Card in this design), the line shading behind the disc, and added my own initials "INV GGJ" at the bottom.  This 'borrowed' design will grace some stationery I hope to offer, based on classical nineteenth century postal ephemera. 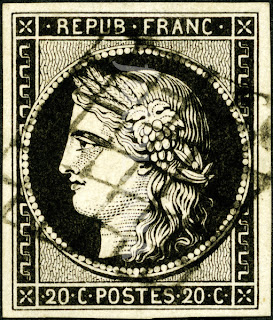 Above is the actual stamp.  Very clear, a clean impression, a gorgeous classic.  Simplicity in a nutshell.  As I began to research the design, discovering the elements it contains, I was struck that apparently, several countries felt the same way I did!  It was amazing how this design was repeated over again in different countries spanning almost two decades after it's initial 1849 French release, to whit: 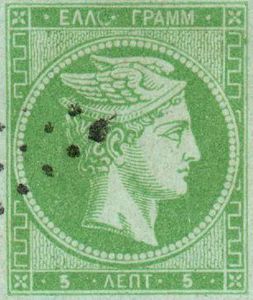 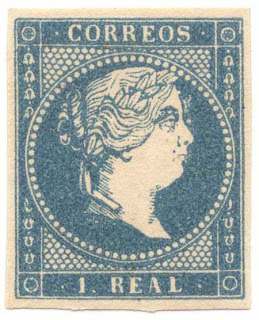 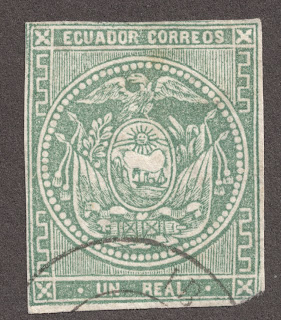 This was just from briefly cruising around the Internet, cherry picking images.  There are probably many more.  The use of this design seems to span from 1849, up to 1865.  Sixteen years, possibly more.  That's what I call an enduring design, considering these were the earliest of issues from these countries.  No doubt that officials from these countries admired the stamps they were receiving from their correspondence with the French Republic.

Well, it's not lost on me that as a design rooted in ancient Greece, Greece might be interested in using it.  Other Latin countries might share tastes similar to France, after all: Spain and France had been politically connected off and on for a good part of the 16th and 17th centuries.  What's there to be surprised about?  But cultural similarities or not (I wonder if Italy......) a good design is a good design, by any stripe!  A twenty year run stemming from a single design, not bad.  Not bad at all.