One of the things I do is design work for a local ministry, the Central Florida Pregnancy Center, located in Deltona, Florida. Each year they sponsor a very nice, rather upscale fundraising banquet at the DeBary Golf and Country resort. It's been my pleasure to have been involved with this function, now going on three years.

This year, we decided that I not only design this year's banquet announcement, but print it as well, taking advantage of the virtues of Letterpress Typography. (Read: nice deboss into Crane Lettra . . . of course!)

The design we settled on this year called for something more dramatic than the relatively flowery, or sentimental designs of the past. This year they wanted an announcement that would announce like a trumpet. So we chose a two colour design featuring a central silhouette of a blazing torch, with rays extending from the centre of the card to the outer border.

The border and text are Van Sonn's process purple. The torch and rays background is an 8:1 mix of process yellow and opaque white. Since purple is compliment to yellow, the text fairly jumps.

These announcements resemble more a handbill than a typical announcement, owing to the dramatic design. It would actually make a great poster. One dynamic that feeds this is it's outsized dimensions: 5x8.5". It requires a 9x6 envelope.

Since it is, in fact, hand designed and hand printed, Q5 Studio and I consider each copy a limited edition collector piece. But I opted not to sign and number each of the 350 copies! 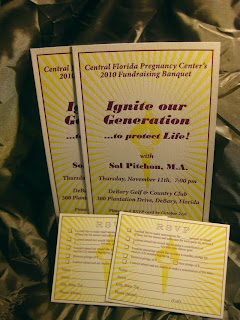 Each impression was "double rolled" on our Chandler and Price New Series 8x12 platen press, which did a good job. I would not suggest a steady diet of large deep deboss work on a press of this size: a Kluge is better suited for this, if large areas are required for such high pressure work. However, the 8x12 is perfectly suitable for standard announcement sizes requiring debossed open fiber stock work. 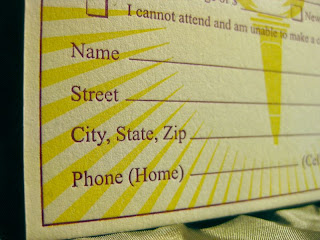 Here is a close-up of the RSVP. Border registry was pretty tricky. But we managed to bring the rays almost exactly to the outer edge of the border. There were a couple drifts owing to minute finish cut size differences. I had less than 0.25mm tolerance to playwork with. 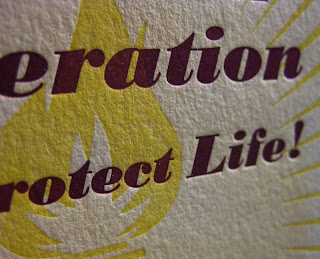 The 5x8 announcement required both double rolling and double striking in some cases. Whenever you have a die that carries lots of ink surface, especially broad, unbroken areas of colour, you have to look out for: even pressure and ink distribution. These types of designs can become very thirsty on a letterpress, and to keep an even layer of ink on each impression, the ink disk had to be reloaded every fifty impressions. Definitely could have used an ink fountain on this job. The RSVP cards were not nearly so thirsty, but the colour registry was twice as critical. 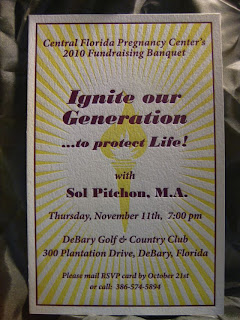 The paper used was Pearl White Crane Lettra, supplied to us by none other than Mama's Sauce Printery, Orlando. Thanks again Nick. And next time I do something bigger than standard greeting card or announcement card sizes that require some dig, brother, we'll use one of the Kluges down there, ok? :>)

All dies were 16g. magnesium, wood mounted by Owosso Graphics, who did an awful lot of work, put up with an awful lot of phone calls from yours truly, and got them to Q5 Studio & Pretty Good Letterpress awfully fast. You guys are the best.

Well, this is pretty much it for today's installment. I might add that the total run time for the project as a whole was about 16 hours, backing out the drying time and the time taken to do the layout and vector design work. Average impression speed factoring double rolling and double striking can run impression cycles up to over ten to fifteen seconds for each impression, as compared to the normal 3 seconds. This job definitely required hand feeding.

Good Providence in all your printing and Letterpress endeavours!