Another Day at the Settlement Print Shop


I went up to the Florida Pioneer Settlement for the Creative Arts today to bring back about a hundred copper, zinc and woodcuts that I had at my home, salvaging what could be saved and cleaning up what was left. About two boxes of wood mounted ad cuts of all sorts were donated to the Pioneer Settlement by the Daytona Branch of the Orlando Sentinel about ten years ago, and over the years atmospheric damage took out the magnesium and some of the zinc. Careless storage of vinyl rollers above the open boxes created another problem: a thick layer of goo dripping through the box, creating an almost impenetrable morass. It took lots of hot water and kerosene, hours of scrubbing with a toothbrush and careful drying to bring back about one hundred of these cuts. I will show the cuts later. These were ads for everything "Florida", from Mackel Brother's homes to Citrus adds, interior shots of 1950's and early 60's model homes which were dot-etched copper halftones. Several portraits of local political figures number in the collection, and at least one very early halftone of a dreadnought-bowed Inland Steamer, possibly a DeBary steamer, but more likely an Inland Waterway carrier steamer.

While I was there, I shot some views of the shop, a project underway, with lots of sorting through "over donations". There's a lot of stuff to weed thru, lots of Black Widows and Brown Recluses to avoid. Let me tell ya, in Florida, you best be careful pulling open a type drawer that hasn't seen the light of day in over fifty years! You ain't up Nawth, brother yank, you be in the Swamp! I exaggerate not. 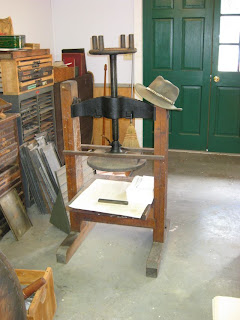 One of the things I had to do today was wind and jog about 4 or 5 reams of 40" stock, run them thru the Reliance Cutter, and bring them down to useable size. I used the Paper Press to pile the stock. 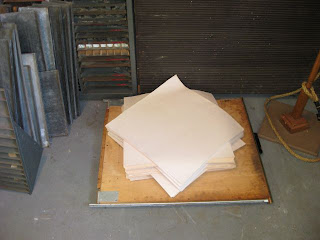 Here is where I set the cut stock first, and after the pile got high enough, into the "winepress" they went. 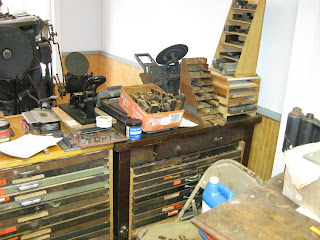 Here's a couple shots from behind the front desk. Each and every drawer and cubby must be inspected, cleaned, and each type case sorted and identified. Many of our cases which were donated were absolutely pied, and were that way for about half a century! I could tell from the occasional 1956 penny or dime. Not one item was recovered from these cabinets newer than 1962, or older than 1917 (vid the Doughboy entry a few months back.) 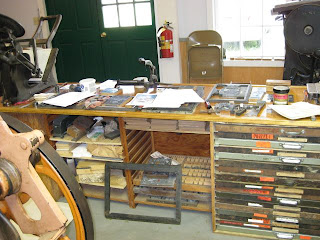 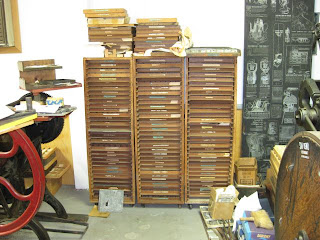 These are a series of home-made half-cases. Actually they are pretty cleverly put together, obviously by someone who had no access to Thompson or Hamilton cases. The cabinets are entirely plywood, about 40 years old, and each case is entirely made of tempered masonite. Many did not survive the damp well. A lot of type has to be moved around, I'm afraid. 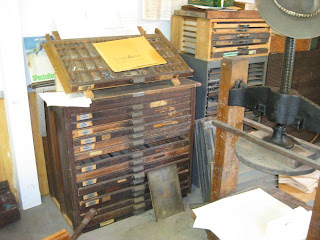 This was my old Hamilton Cabinet from when I operated Heirloom Press from out of Palm Harbor. It dates to 1880. The Iron drawer pulls used to be highly sought after years ago when everyone was using these drawers for "nik-nak" and curio shelves. The drawers are made of poplar and fronted with Jacobean stained oak, with one piece solid wood bottoms, probably ash. It originally stood two feet higher, but dry-wood termites forced me to cut off the bottom two feet of the cabinet and rebuild the bottom. The lower drawers were also lost. The queen termite was a big as one of those African termite queens you see in National Geographic. The cabinet came from a shop in Downtown Clearwater, Florida. 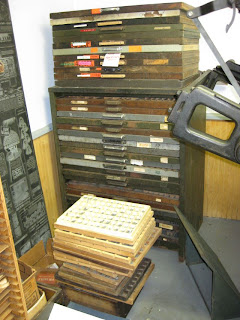 This is one of the newer, metal cabinets with an ecclectic collection of type drawers in and atop the cabinet. Many of these cases are pied or misidentified. 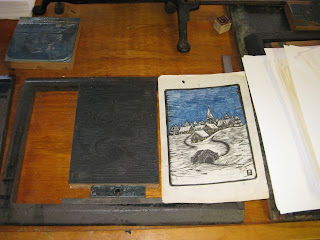 This is a demo linocut and print. I cut this block for Christmas, 1992. Never thought then that it would be on display at a Museum 16 years later. 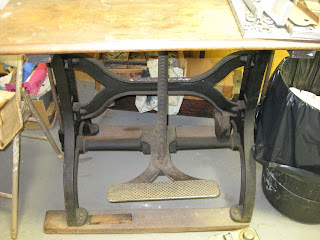 Above and below are shots of our Peerless Line Perforator. We figure it to date to around 1890 or so. Of course, it is treadle powered. It turns out to be the Museum Staff's favourite machine. Who knew so many things needed to be . . . er . . . perforated? 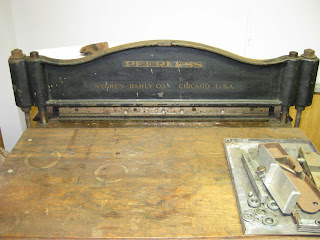 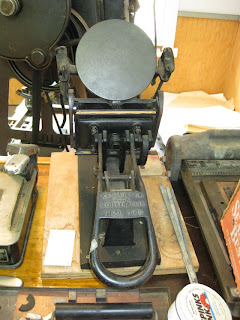 This is a very early model Kelsey Mercury 3 X 5. I made many a commercial business card on this little press. Don't sell a Kelsey short! It serves as one of our demo presses for visiting kids to try out. 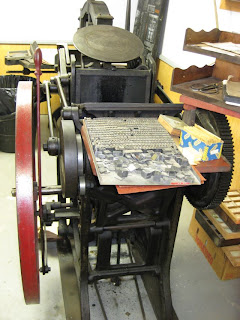 This is our newer 8 x 12 C&P "Old Style" press. I think it dates to around 1912. You might notice that I am in the midst of sorting out some large point-sized caps. We have foundry type up to 96 pt! 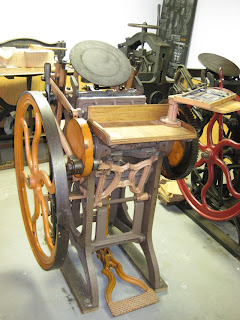 This is the other 8 x 12 C&P "Old Style" press. All of our presses are either pump or treadle. Including Casey, our 12 x 18. This press dates to the late 1880s. Yes, that is the original colour, according to the Donor. 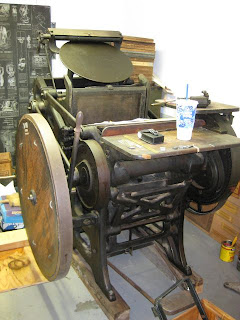 Ahh, yes, Casey. Casey is our 12 x 18 "New Style" C&P Jobber. He's pretty big, but treadle powered nonetheless. Half a Horse will power Casey, though. These presses are very well balanced, and in spite of Casey's size, he is no more difficult or unwieldly to operate, make-ready for or clean up than the smaller presses, save for the additional roller and cleaning up the ink reservoir. We have an extra 12 x 18 in storage. 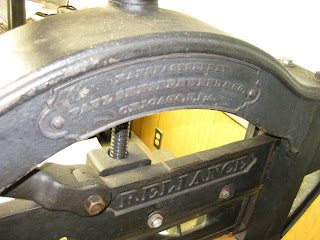 The following shots are of our Guillotine cutter, our trusty Reliance. I believe it is a 30" cutter, just right for our shop. I'd love to get one for my own shop at home. 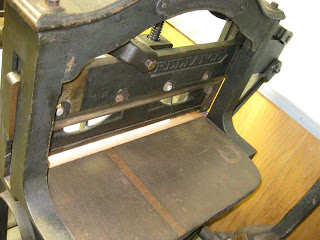 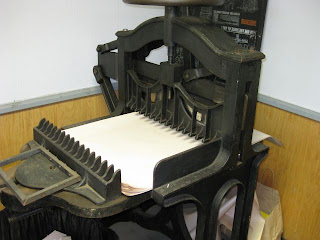 I spent about an hour cutting stock on the Reliance today. Very smooth operating, I didn't even break a sweat. If we had one of these back at the print shop I worked at back in '74, I wouldn't have wound up in the amputation ward at the Old Orange Memorial Hospital. It was a "modern" machine that messed me up. But all my fingers are attached, and I still do guitar performances. All's well that ends well. But let me tell ya, I don't touch powered cutters. I don't care how "safe" they are.


Well, that's about it from here. In a few installments I'll revisit the "Vise Cuts", small intaglio prints made from a small piece of polished aluminium, Laid linen rag paper, a few small pieces of rubber and a 30-lb bench vice.